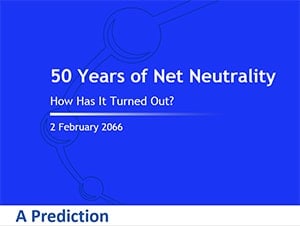 In the End, Open Internet Wins

It was 50 years ago this week that Net Neutrality was finally adopted as a irrefutable policy in the United States. This was after several court battles and great concern by the telcos who had to live within the new framework. Many predicted stagnation of innovation and the economy. But it didn’t turn out that way.

Deregulation of telecommunications in the last century had many positive outcomes, however, by the 2010’s telcos struggled to compete on equal footing with high flying Internet companies. Cost cutting was the preferred method to keep profits high. After the net neutrality rulings, the resulting massive consolidation in the industry was painful and disruptive. Once the dust settled, the telcos’ steady financial performance and high dividends worked to their benefit. With what became a new flavor of “cost plus” regulation, their ability to fund R&D without impacting profit margins led to breakthroughs in compact fusion and batteries that rivaled the earlier Bell Lab.

Widespread adoption of Net Neutrality effectively barred telcos in developing countries from charging a fee for traffic entering their borders. Barack Obama, the American President who led the fight for Net Neutrality, knew that developing countries had to have alternative ways to fund communications infrastructure. Upon leaving office in 2016, he worked tirelessly to bring together global tech companies, governments and telcos to address this issue. He is widely credited with the Naypyidaw Accords that were adopted by most countries by 2025. The accords funded telecommunications infrastructure with a global micro tax on each share of stock traded equal to ¥0.000000001 (CNY).