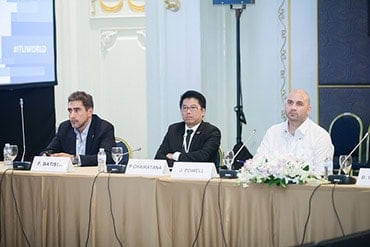 Enabling tech SMEs to share their most important issues, questions and requests for support directly with government representatives, the B2G Dialogue Top-down vs Bottom-up Innovation: Fostering Future Tech Entrepreneurship brought a range of SMEs and innovation initiatives face-to-face with their greatest potential enabler – and greatest potential barrier – the government.

What is the biggest barrier to SME growth and funding? moderator whurley, Managing Director, Goldman Sachs, asked the SME half of the table.

Funding is important but, in the words of Per Lind, Partner, ASEAN, HYPR Asi,  but “if you can’t do it without money, money wouldn’t help some problems.” Lack of local technical talent is the biggest issue for his startup, he said, calling on government to introduce policies favourable to attracting foreign talent into Thailand – and on universities to create relevant programmes. After all, “every country is competing on talent.”

He also cited lack of government information in English, the universal language of the startup, and the plethora of different agencies complicating information flow.

Lack of transparency from the government is a big issue for Shelters, expressing his frustration at the difficulties in finding a clear path to relevant decision-makers.

Building human capacity is vital, the panel agreed, stressing the need for schools and universities to support tech training, providing soft skills and project management training. In Thailand in particular, the best talent tends to go to big corporates or to international companies, leaving SMEs unable to scale up or compete.

Nor is bringing labour in from overseas a viable alternative for SMEs operating in Thailand, given restrictions on passports and visas, and caps on the number of foreign staff per company.

Regulation to support a healthy innovation environment, including special consideration for the status of pre-revenue startups, would remove many of the barriers frustrating entrepreneurs.

Many of the difficulties with which Thai SMEs, incubators and supporting organiztions struggle are mirrored in different circumstances, but with similar effect, in other countries around the world – everywhere apart from the USA, according to one panelist.

Representatives from government recognized many of the issues, but provided an alternative perspective on the need, for example, to control the flow of foreign workers in order protect local employment.

“Education is where everything starts,” said Dr Pun-Arj Chairatana, Director of Thailand’s National Innovation Agency, admitting that reconfiguring or rebooting the education system is complicated by the need for connectivity.

ITU Secretary-General Houlin Zhao outlined how important dialogues such as these are in bringing governments and SMEs face-to-face to explore the specific challenges and priorities of SMEs, improving government-SME relationships and accelerating development.

Reaffirming the commitment of ITU Telecom World to becoming an international platform supporting SME growth, he announced the launch of two new publications.

“A review of Micro, Small and Medium Enterprises in the ICT Sector”, was produced by the Emerge Partnership, which is helping to shed light on and increase understanding of the role of tech SMEs in the economy.

The second publication is a compilation of experiences from ITU Member States who are actively supporting tech SMEs through the interventions of the ICT ministries.