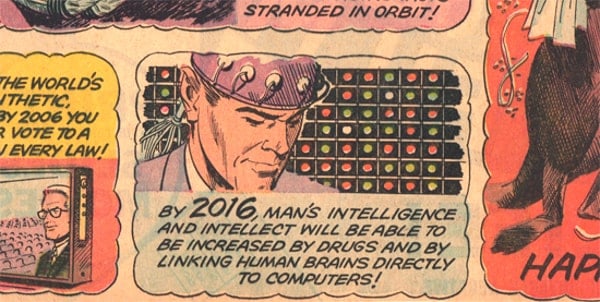 In 1965, comic strips predicted that the human brain would soon be directly connected to computers. Will this become a reality?

Detail from the December 26, 1965 edition of the Sunday comic strip “Our New Age”

Athelstan Spilhaus’ predictions in a 1965 edition of the comic strip Our New Age may not be entirely serious, but they’re still laughably far off the mark today: the artist imagined that by 2016, we’d be able to improve our intelligence with magic smart pills and by hooking our brains directly to computers. Of course, the next prediction in that strip is that by 2056, our holiday dinners cooked by robots could be served to us by friendly, intelligent animals trained to be household helpers – including kangaroos.