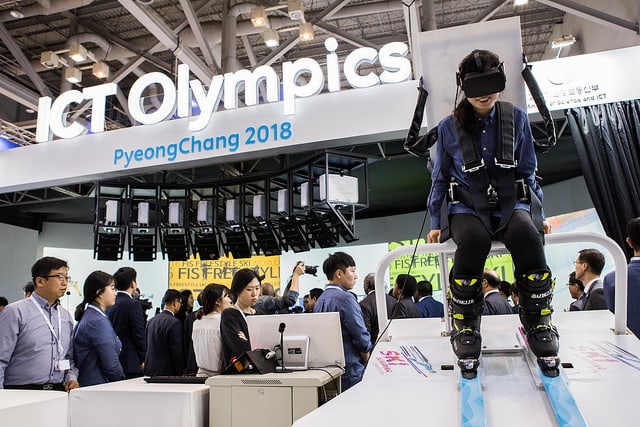 To a backdrop of high-speed luge, real-life ski jumps and figure-skating- and the background soundtrack from “Frozen”- the Korea Pavilion highlighted the state of the art technologies which will power the upcoming PyeongChang Winter Olympics, delivering a truly immersive experience for visitors. Technologies on show and to experience included 5G, AI, IoT, VR, UHD and UWV.

A VR ski jump simulator, constructed with a similar angle to an actual ski jump and using images based on a ski jump centre gave delegates a real-life experience of ski jumping. Delegates were also invited to join an interactive game copying cute Olympic mascot, Soohorang, as he skis, bobsleighs and prances his way round the world- even in 3D (no glasses even required!)

The IoT zone showcased an IoT luge performance analysis tool, which will be used to measure the tensions of athletes when they descend, by collecting heart rate data.

Multiple ‘time sliced’ cameras using 5G features will help track the position of fast-moving players, skaters, even a bobsleigh run, delivering a true winter sports experience and the chance to experience high-adrenaline sports even from the perspective of the competitors.

With only 5 months to go until the Pyeongchang Winter Olympics action gets underway, it’s clear that the innovatively used technologies showcased at ITU Telecom World 2017 will ensure that Olympics visitors will experience a cutting-edge ICT Olympics in 2018 too.