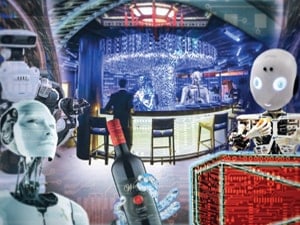 As the great physicist and Nobel Prize Niels Bohr once said: “It’s hard to predict – especially the future”. Predictions are mostly incorrect, and more importantly they do not anticipate the significant developments properly. George Orwell? Well, what we have today, is far beyond what he could have possibily imagined. So, it is a true challenge to come up with predictions.

Having said that, current developments suggest, that in the future, we will engage in symbiotic relationships with robots, relations that will be characterized by intense emotions, bonding, and high interdependency. The fact that people bond with technology is in itself nothing new: we strongly bond with our mobile phones, pads and laptop computers. Now, one of the fundamental differences between these current technologies and robots is that the latter are physical entities moving autonomously in the real world, which gives them an entirely novel quality and will lead to unprecedented experiences as we interact with them – this is much more about emotions than it is about technology.

A frequently asked question is whether we could still “pull the plug” on the robots (or the computers) if we don’t like the way it’s going. There is already a fundamental flaw in the question: It’s not “pulling the plug”, but it would be “pulling billions of plugs”. Even if we wanted to, this is no longer possible. The stock exchange, the entire economic system, all the supply chains, the complete logistics and traffic, would completely break down and there would be global famine – a true doomsday vision. We must keep the computers and the robots going. In this sense, we are already the slaves of the machines that we created – they use us, the humans, to keep themselves going – no need to wait for “Terminator”. It is the computers and robots that force us to maintain and to continuously upgrade them. Whether we want to attribute evil intentions to them is a purely philosophical question, not a scientific one.

And they reproduce: This is another horror-scenario – self-reproducing super-intelligent, mean robots. Again, we do not have to wait for “Terminator”-style robots. Today’s robots and computers (and other machines) reproduce, it’s just that the reproductive mechanisms are different from those of biological systems: they exploit humans to do the job, they force us to build factories for them so they can reproduce quickly; and the good ones proliferate whereas the ones that don’t make it in the market will become extinct. This is the Darwinian nature of our economic system.

Now are we just the victims of these developments? Will they just happen? Or can we do something to shape the future, to guide it into a desirable direction?

One of the big questions will be whether people will want these robots and will accept them and welcome them into their lives. What will the implications be? How will they impact our personal and professional lives? 50 years ago, nobody had even a clue of how mobile technology and the internet would fundamentally change virtually every aspect of our society – we were pretty much overrun by the technology and had no time to familiarize ourselves with it before it was already present. The whole transition might have been much smoother, had we had the opportunity to experiment with the technologies beforehand. And this is precisely where the Robolounge projects come in:

Providing first-hand experience with the future technology of highly interactive robots – rather than only making predictions, talking about it, writing articles, showing movies, and videos – is the goal of the Robolounge project.

So, one of the predictions is that in the future we will have a symbiotic relationship with robots, and interactive machines in general, as illustrated by the Robolounge, a development that has started quite some time ago. But the Robolounge is more than a prediction. It is a venue, a hub, of where people will be able to actually experience the future in a real-life environment, a lounge with drinks and food. Rather than simply reading about the future, with this lounge platform, people can get a feel of what it will be like when we closely live with interactive robots (and other machines). One of the topics of this ITU summit is that we want to create the future, not just passively drift into it. This is another goal of the Robolounge: people are encouraged to actively participate in shaping the future of technology by engaging in various types of events and forums.

The Robolounge should be operational some time in 2016.