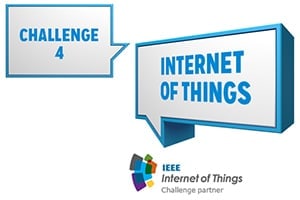 On September 25, the ITU Telecom World Young Innovators Competition launched a challenge in partnership with the IEEE IoT Initiative, looking to work with our community to co-create ideas for new startups using the Internet of Things for social good.

Once the internet used to be all about connecting people to other people. Now the advent of the Internet of Things, or IoT, has moved the focus from human communication to connecting machines and devices, enabling billions of physical objects around the world to interact digitally – creating an enormous new market and radically transforming industry sectors from healthcare to transportation, energy to agriculture.

The IoT brings together sensing, communications and information infrastructures on an unprecedented scale. Connected devices generate data; that data is rendered actionable through big data analytics; the results of that analysis are used to change processes and, as a consequence, improve peoples’ lives.

According to speakers at the Internet of Everything panel session at ITU Telecom World 2013, the total market value of IoT is estimated at over USD 14 trillion, representing between 15 and 25 billion connected devices by 2015. With this prize in mind, most IoT developments to date have been commercially-driven. The heavy demands on infrastructure, costly technology and need for strong, widespread connectivity have also largely limited IoT systems to the developed world.

But IoT has tremendous potential to be harnessed for social change in developing economies in particular, such as amplifying the effect of limited resources in healthcare, revitalizing agriculture to reduce risks from natural disaster and famine, or enabling smart grids to improve the efficiency of electricity production and consumption. IoT solutions and systems are a hugely exciting prospect for driving social good in developed and developing markets alike, vastly improving the lives of people all over the world.

Which is why we’ve launched our latest ITU Telecom World Young Innovators Challenge on exactly this theme: using the Internet of Things for social good.

We’re looking for the best ideas for new businesses or innovations that can take advantage of the IoT’s potential for the greater good. This could involve methods for spreading or expanding access to existing technology such as near field communication, sensors, RFID or QR codes in emerging or developing countries. It might focus on the application of IoT technology to issues and fields of particular interest to emerging or developing economies, such as agriculture, water management, transportation, or predicting the outbreak of disease. And we’re particularly keen to welcome ideas on an “Intranet of Things” – local networks of IoT devices functioning on a smaller scale to serve a concrete social purpose.

We’re particularly delighted to be working on this challenge with the IEEE IoT Initiative, which aims at driving the evolution and deployment of successful IoT solutions in academic and industrial environments. In addition to a vital role in the expert facilitation online, development of ideas and selection of the winners, IEEE IoT Initiative chairman Roberto Minerva will be speaking at panel session on the Internet of Things at ITU Telecom World 2014.

This is a co-creation challenge, meaning we’re asking you to submit ideas, discuss, exchange ideas and contribute in a collaborative process through our crowdsourcing platform at ideas.itu.int. The ideas with the greatest potential will be developed into concepts under the guidance of expert facilitators, before being whittled down to two winning finalists. Those winners will join ITU Telecom World 2014 in Doha this December, where they’ll pitch their ideas before industry and government leaders, benefit from workshops and ongoing mentoring, and win up to USD 5000 in seed funding.

We’re looking forward to hearing from you!