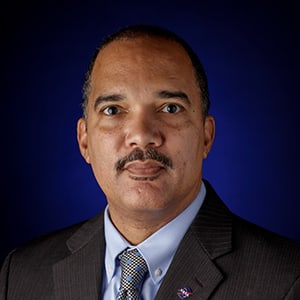 Mr. Sparrow is currently the Director, Spectrum Policy and Planning Division, National Aeronautics and Space Administration (NASA). Mr. Sparrow joined NASA in October 2009. Mr. Sparrow, in this capacity, is the principal advisor to the Deputy Associate Administrator for Human Exploration and Operations for spectrum policy and planning.

Prior to NASA, Mr. Sparrow served as the Deputy Director, and Director (Acting), for Spectrum Management in the Office of the Assistant Secretary of Defense for Networks and Information Integration, OASD(NII) - 1997 to 2008, as the principal advisor to the ASD(NII) for spectrum and electromagnetic environmental effects (E3) policy.

From 2008-2009, Mr. Sparrow was employed with the ITT Corporation as a senior engineering manager. Mr. Sparrow’s duties included providing senior policy and strategic expertise to the OASD(NII) and the Defense Spectrum Organization.

His professional experience includes thirty-two years of Federal civilian service - eleven years with the National Communications Systems (NCS), eleven with the Office of the Secretary of Defense, and ten with NASA.

Mr. Sparrow’s professional experience includes an assignment on the staff of the U.S. House of Representatives, Committee on Energy and Commerce Subcommittee on Telecommunications and Finance.

Speaking at the following session: