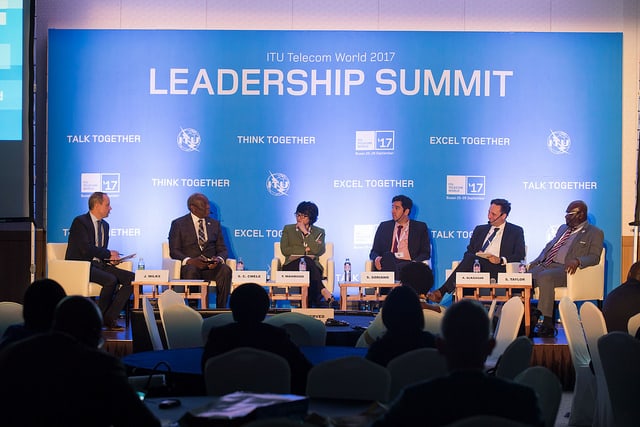 Dealing with current regulatory challenges, planning for an advent of new technologies which cross verticals and keeping systems secure were some of the challenges of building a resilient digital future shared by a diverse, international set of panelists at the second Leadership Summit session, moderated by Euronews Jeremy Wilkes.

“It’s all about the people” explained H.E Siyabonga Cyprian Cwele, Minister of Telecommunications and Postal Services, South Africa. In building a resilient digital future, everything must focus on the people. They need the right skills and to be supported by the right infrastructure and policies, in order to be fully empowered.

Malaysia has in place a baseline infrastructure, thanks to its national broadband initiative, according to Yasmin Mahmood, CEO, Malaysia Digital Economy Corporation, but a key concern in building an infrastructure which is supportive to start-ups is not just getting policies in place but also changing mindsets. People need to be truly ready to embrace the digital transformation and ready to move to the future.

To help build the right skills in young people, Malaysia is putting computer science into the curriculum, although establishing regulation can be challenging if one is unsure about what future direction technology will take. “How can we develop talent, train our children for skills when we don’t even know what they are?” asked Mahmood.

And it’s not just skills training. “As we move forward the key is to understand the behaviour of future consumers. Those who can master what will be the need of the future smart consumer will be master of the future,” said South Africa’s Minister Cwele.

Sharing their experience in regulating new technologies, Sébastien Soriano, BEREC Chair and President of Autorité de Régulation des Communications électroniques et des Postes (ARCEP), explained how they were asked to regulate IoT by prospective users, and after consultation with the relevant stakeholders published a white paper. Its main conclusion was – somewhat radically – that no specific regulation is needed for IoT. “A bazaar is a better system than a cathedral,” he explained. In the case of IoT, this means that entrepreneurs will find their own solutions, so “we need to leave the door open for new business models.”

Looking at the future of IoT and vast numbers of interconnected devices, we could reach the limits of scalability and ability to cope with security issues, according to Ammar Alkassar, CEO, Rohde & Schwarz Cybersecurity. “We need to change the mode of how we look at cybersecurity,” said Alkassar, to cope with this vast influx of online transactions and activity. “Digital payment infrastructure without security does not work, it needs security,” he added.

“We need to get in place a system to ensure that policy and regulatory frameworks address the infrastructure of the future,” said Shola Taylor, Secretary-General, Commonwealth Telecommunications Organisation (CTO). CTO is also trying to encourage more cooperation between operators and regulators, as well as international cooperation, particularly through ITU, which is essential in building cybersecurity and helping keep users safe.

Minister Cwele explained how they are faced with a conundrum: on the one hand they are encouraging citizens to use new technologies yet on the other, governments may not necessarily have the regulatory capacity to deal with these new technologies, particularly as the internet does not respect borders – a challenge echoed by other delegates. The Minister also raised the question of ethics; do we always understand what all the IoT developments will mean, particularly in terms of security?

The advent of 5G also poses a number of challenges as well as opportunities for players across the ecosystem. For a regulator such as ARCEP, preparing for 5G involves the concrete task of assigning frequency as well as defining exactly which areas the regulator can or should cover, as 5G technologies span so many different areas from railways to roads and cars. Regulatory bodies are being defined through existing horizontal industries but going forward so many regulations will need to cut across different verticals, echoed Mahmood.

Nevertheless, we should not wait for technology, according to Soriano. End users who want to use IoT in areas such as smart maintenance should not wait, but use the technology available today and “go to IoT, as it would be a pity for our continent to be lagging behind” he added.

In the 1990s, explained Soriano, Europe was a leading continent in the telecoms field, although it has now lost the battle of the smartphone and internet platforms to other world regions. How will the European region attain a competitive edge in the next wave of innovation? In IoT terms, this could mean, according to Soriano, having to “support people that don’t exist today ”- the entrepreneurs of the future. To help empower and guide future innovation and foster a climate in which it can flourish, France has created an innovative regulatory sandbox allowing for a legislative relaxation, under certain conditions, to enable the development of technically or commercially innovative technology or services. Unlicensed spectrum is to be opened and available to everyone under certain obligations of usage.

Although regulation is needed where there is vulnerability, Alkassar asked if people should also be forced to take responsibility – after all, house owners are responsible for securing their systems so should it be the same in the digital world? He also drew attention to the changing nature of the crimes which regulation needs to take into account; although Germany has experienced a recent decrease in bank robberies, there has been a surge in cybercrime stealing from banks. Our systems need to be based on security and design, or a “security by design” approach, explained Alkassar, to help vendors improve systems be more resilient.

With increasingly large numbers of objects becoming connected, should we build in resilience? asked Jeremy Wilkes. We need to work with ITU, according to Taylor, as it already has experience in emergency and disaster mitigation. According to Minister Cwele, having a critical infrastructure is key. Echoing Taylor, he commented that partnerships here are vital as governments cannot deal with the challenges of building a resilient digital future alone.