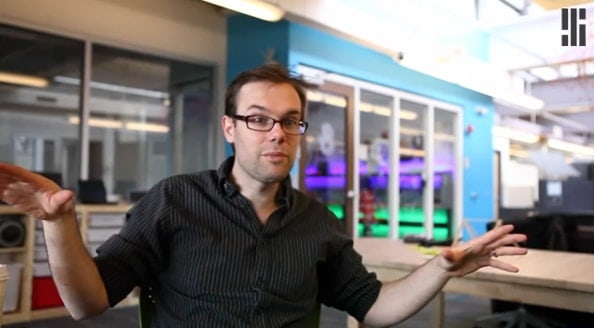 Chris Harrison, an assistant professor at Carnegie Mellon University, Pittsburgh, researches the future with existing technologies. He call this his “time-machine research”.

How will we interact with computers a decade or two from now? Could we manipulate digital objects with more than just our fingertips? Will screens become obsolete? Chris Harrison spends his days trying to answer these very questions. An assistant professor at Carnegie Mellon University, in Pittsburgh, he directs the Future Interfaces Group, an engineering playground where he and his students conduct what he calls “time-machine research.” By hacking or cobbling together existing technologies, they are exploring new, more expressive ways of communicating with machines.

Among the group’s myriad inventions are a smart watch that wearers can manipulate mechanically, a light projector that turns any surface into a touch screen, and a tablet application that allows users to summon different digital tools, such as a pen or a magnifying glass, simply by changing how they touch the screen. Future computers could easily have such capabilities, Harrison says, although they almost certainly won’t look like anything we can imagine today. Decades before humans invented the airplane, he points out, people drew pictures of flying sailboats and bird-drawn carriages. “They got the concept right but the implementation wrong,” he says. And consumer electronics are no different. “When we envision possible future interfaces, we assemble them out of the things we know.”

So who knows what must-have gadgets will exist in 2064? But whatever form they take, Harrison is certain that our interactions with them will be more natural and versatile—that is, more like our interactions in the real world.