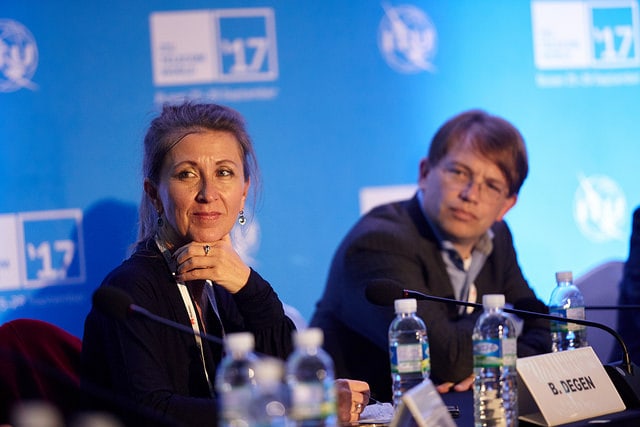 How can we define AI, measure its impact on societies and economies in different countries around the world, understand its potential, and plan for its implementation?

These were some of the framework questions opening the debate of the 3rd Economic and Industry Experts Roundtable at ITU Telecom World 2017, bringing together academics, consultants, economists and technology specialists to address the unstoppable advent of the age of AI and the concerns it raises.

Defining AI, it appears, may be neither possible nor relevant at this stage. Urging a focus on practicalities and facts, Danil Kerimi, Director of ICT Industries at WEF, gave the example of a UN initiative to find a global strategy on counter terrorism that wasted years in debating a definition rather than dealing with the problem. “Definitions are important to know what we are talking about, but its applications are more relevant right now.”

Panelists nevertheless took up the challenge to explain AI on their own terms, starting with moderator Catalin Marinescu, Head of Corporate Strategy Division at ITU: “We think of a blend of advanced analytical and machine learning applications which enable actions that would traditionally require human intelligence. AI is a tool for human development.”

We may have a very broad definition that separates AI from robotics or other technologies, but according to Maikel Wilms, Director, Boston Consulting Group “from a business perspective, it is irrelevant. We need to look at specific policy and use cases, the implications for medium and longer term are more important to enable businesses and policy-makers to prepare.” And technology advances so rapidly that any definition will have to be continually updated.

AI as a concept involves self-awareness and machines thinking on their own, according to Neil Sahota, IBM Master Inventor and World Wide Business Development Leader, IBM Watson Group, IBM. It is cognitive computing in the sense of mimicking the way humans work, human experience and knowledge, but can go no further: “AI can’t answer what we can’t answer.”

Where cognitive computing is indeed special, he continued, is in its ability to truly understand the natural language which we take for granted as human beings. If we say, for example, “I’m feeling blue”, other people know we are describing an emotion; a machine will think we have changed colour. AI, however, can draw on other language information to understand and create a conversation, rather than just key words.

For DukHee Lee, Professor, School of Business and Technology Management, Korea Advanced Institute of Science and Technology (KAIST), AI is a highly intelligent procedure that can substitute human beings for mental work, with different features from other machines, but missing certain aspects that make us human: emotions, morality, and “trust features of a human being which we cannot quantify”

“AI depends on human beings for wisdom,” he continued, so we need to focus on how to use AI, what its real function is for humans. We don’t want to reach a stage where humans depend heavily on AI, but to reach a compromise, “some optimal level of AI, some work substituted by AI but as a complementary to human beings.”

AI relies on data, Marcelo Motta, Digital Transformation and Big Data Market Management, VP of Marketing, reminded the panel, but the key question is who is providing that data?

There is a very real danger, pointed out Wilms, of unintentionally passing on human bias when designing AI or providing data: algorithms could reflect biased decision making in hiring at a company, for example, potentially preserving sexist or racist behaviours through correlation.

Beate Degen, Partner, EY, used the composition of the panel in the room to paint a very clear – and rather disturbing – picture: only a very limited number of people are responsible for giving input to AI from which to learn, meaning the vast majority of the world is excluded. And that elite band shaping AI and its untold potential impact on future societies is not likely to be composed of women from, say, Germany and Central Africa. AI is largely being designed by a less than diverse group white men between the ages of thirty and forty.

“I think we are embarking, just entering the digital age and revolution,” Kerimi said, and it is a human characteristic to be concerned about change, drawing a parallel with fishermen out at sea, first of all looking at the waves and stars, and then augmenting their abilities with a compass. “The compass gave us new abilities, but it didn’t replace humans.”

Many jobs will be lost – and those affected will be largely women and the underskilled engaged in low-pay, menial work.  But there is an upside, according to Thomas Suh, Co-Founder & President of Legalmation: we as humans are capable of many things, and will have more free time to be creative. If we are beaten at chess or GO by AI, we can use our spare time to learn another game; the AI can only carry on playing GO or chess.

“The uncertainty is scary,” he said, “and it’s a big job for the government to calm people down in the huge era of transformation that is going on.” That basic message on reacting to the advent of AI should be, in his words, “There’s no need to freak out.”

This fascinating discussion continued to address the expected impact of AI on the economy, attempts both quantitative and qualitative to measure that impact, developing the post-AI workforce of the future, how AI could solve the grand challenges of humanity, and its positive impact on each of the Sustainable Development Goals.