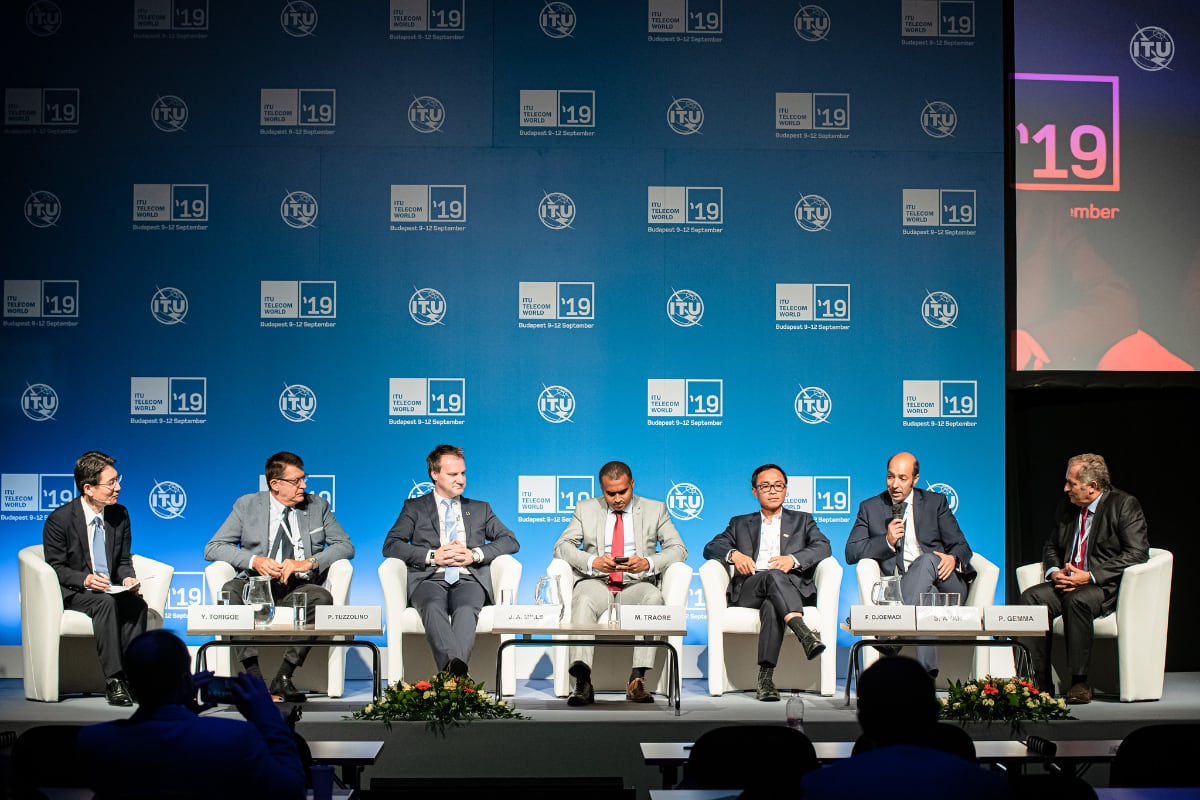 Emerging technologies such as AI, blockchain, 5G, renewable energy and big data have a critical role to play in raising awareness of climate issues – and mitigating the impact of climate change. But the real source of optimism in the fight for sustainability is not the technology alone, according to this panel of experts from industry and international organizations. It is the combination of technology with the skill, awareness and passionate environmentalism of the young people of the world.

Frontier technologies can help enormously in mitigating climate change across all sectors from health to transport, education and manufacturing, explained Orange’s Philippe Tuzzolino, Vice President, Environment, but “we have to be exemplary ourselves”, reducing carbon footprint in the ICT industry itself by ensuring that products and services are produced with lower emissions. The company has committed to net zero emissions by 2050, an ambitious target it hopes to reach through putting innovation into its factories, networks and data centres, including cooling systems, monitoring systems and shared transport and mobility solutions.

Orange is also working to fight climate change through its biodiversity monitoring in Mont Blanc and other mountains around the world, in partnership with academia, NGOs and the general public. Accurate and actionable data make it easier to make environmentally conscious decisions and reduce carbon emissions.

Until now, big data and AI have all too often been limited to buzz words, creating excitement and interest, but little action, according to Joel Alexander Mills, Chief Executive Officer, Augment City AS. It’s important to start changing the interfaces in tech and design, moving away from text to the visual, to a technology that works better for humans – allowing the differing skills of humans and machines to complement each other. “Take data, analyze at a high level to help decision making and make those decisions transparent,” he urged, so people can understand how and why decisions have been made. The holistic use of big data analysis can solve policy issues here and now, not in the distant future – such as halving the traffic flow through a city by mapping the pain points of peak flow against factors such as weather, school opening hours or tourism.

Mills expanded on the possibilities of digital twinning and digital simulation as a two-step process using technology to understand data. “Humans are very good at making decisions based on facts, but not good at making decisions based on intuition. Technology allows us to understand facts and make it as transparent as possible.” Using data to create a digital twin of a smart city involves a top down approach, overlaying a geographical map of the city with data from multiple sources to provide a complete overview.

Once we can see what is happening, we can make choices and changes to combat climate change based on transparent, visible and understandable data. Sometimes low-hanging fruit – small changes requiring relatively few resources – can have a major impact on quality of life and climate change mitigation, such as the Norwegian city dramatically reducing emissions and poor air flow by providing cruise ships in its harbor, with renewable energy.

The second stage is simulation, not just benchmarking data but using the tools of machine learning and AI to allow for proactive initiatives, solving problems before they reach a crisis point. This can have a dramatic effect on climate change by reducing emissions and managing peak flows of water, electricity, traffic and people. “We can use technology to simulate the future and make decisions before issues arise,” continued Mills. “It is an incredibly exciting time as technologies are developing so fast we can’t keep control, and we also have a population, especially the young, who are so keen to make a difference. We have much on our side, but we must push forward together.”

Greener energy sources are key, stressed Mohammed Traoré, Digital and Innovation Advisor, Organisation internationale de la Francophonie, and the move from centralized power plants to decentralized smart city solutions and local smart grids is increasingly important. New technology in renewable energies and storage are key in the easing the complexity in managing sustainable smart cities.  AI, blockchain, IoT and virtual reality can find real use cases in the energy field and have a real impact on climate mitigation – but connectivity is the foundation of any new sustainable initiatives, locally or globally, in developed and developing markets.

Connectivity is also critical to tackling the effects of climate change, as Faizal DjoemadiChief of Digital & Innovation Officer, PT. Telekomunikasi Indonesia pointed out. Indonesia is particularly susceptible to natural disasters, given its topography and position on the ring of fire. As changes in the climate cause mountain snow to melt and forest fires to burn, technology is essential to monitor, warn and mitigate. A partnership platform with startups is focused on creating solutions to protect from disasters, leveraging the power of IoT, data centres and cloud services to outsource innovation, building capacity, skills and awareness.

“The role of technology in climate change is fundamental and undeniable,” said Salem Avan, Director, Policy, Governance, and Strategy Division, United Nations Office of Information and Communication Technology. Technology in the widest sense has a role in enabling us to be more effective, efficient and climate-responsible all that we do. It is also important to use tech not just to solve problems, but to advocate, connect and engage, especially with young people.  We are at a climate inflection point now where we are concerned about what will happen and trying to reduce emissions, but the issue is “whether we can be smart enough fast enough.”

Huawei’s Paolo Gemma, also Chairman, ITU-T Study Group 5 Working Party 2, ITU focused on the need for partnerships working to develop strategies to reduce waste energy and improve efficiency through technology. Knowledge, expertise and best practices in sustainability should be shared to enable developing markets to benefit from the mistakes of early adopters. In developing countries in particular, solar solutions for power stations can reduce carbon emissions, and a hybrid approach using energy from the grid at night and green solar power during the day could have a major positive impact.

Avan added that climate change will have an increasing impact on social and political security, as we see more and more changes in the physical world resulting in migration, displacement and increased poverty. Up to 80% of those affected by climate disruptions will be women and the vulnerable, with the potential to profoundly alter the fabric of society. We need to engage technology to work on these challenges, increasing inclusiveness, changing behaviour, and catalyzing humanity. Of all the emerging technologies, AI is fundamental – not in and of itself, but in what it may open up for us in these difficult times.