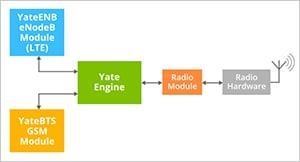 LTE for bandwidth and GSM for voice are a match made in heaven for subscribers.

But as subscribers and operators race for bandwidth, many remote and rural areas remain underserved, and a range of applications (like IoT, evidently) continue to depend on coverage rather than bandwidth. And the technology to best provide it is GSM.

Our approach to making ends meet is a mixed base station (SatSite) which can provide GSM (using YateBTS software) and LTE (using YateENB) at the same time, in the same spectrum, and using the same radio hardware.

The software-defined 2.5G/4G LTE base station will be showcased during ITU Telecom World 2015, where SS7ware Inc. will exhibit for 4 days.

Using software-defined radio and off-the-shelf hardware, SatSite provides access for both GSM/GPRS and LTE from the same equipment. A live demonstration will be held at our stand P13 on October 14, at 11:00.

The technology behind SatSite was achieved by designing a software-defined base station that supports mixed 2G/4G spectrum allocation, and which is based on Yate telephony engine.

In Satsite, we replaced commonly used FPGA and DSP boards with a generic Intel chipset. Both the GSM and the LTE layers are implemented in software, allowing the base station to be reprogrammed or reconfigured to support new protocols. A base station can run GSM at first, and then be software-upgraded to LTE, running multiple air interface protocols using the same radio, at the same time.

Based on the subscribers’ activity (data or voice), operators can assign in software the spectrum priority for either LTE or GSM, so LTE gets a higher priority if there is a lower use of voice services. This optimizes the resources allocation in the network and supplies better access to users.

Yate telephony engine is an underlying part of the software architecture of our mixed 2G/4G RAN. It has a highly expandable architecture that provides unified management and monitoring. Both YateBTS and YateENB are software modules based on Yate.

Using off-the-shelf hardware and a generic operating system (Linux), SatSite facilitates an easy adoption of new standards or technologies, like 5G as it becomes available.

More details can be obtained during ITU Telecom World 2015 in Budapest, October 12 to 15, at stand P13 in the exhibition area.