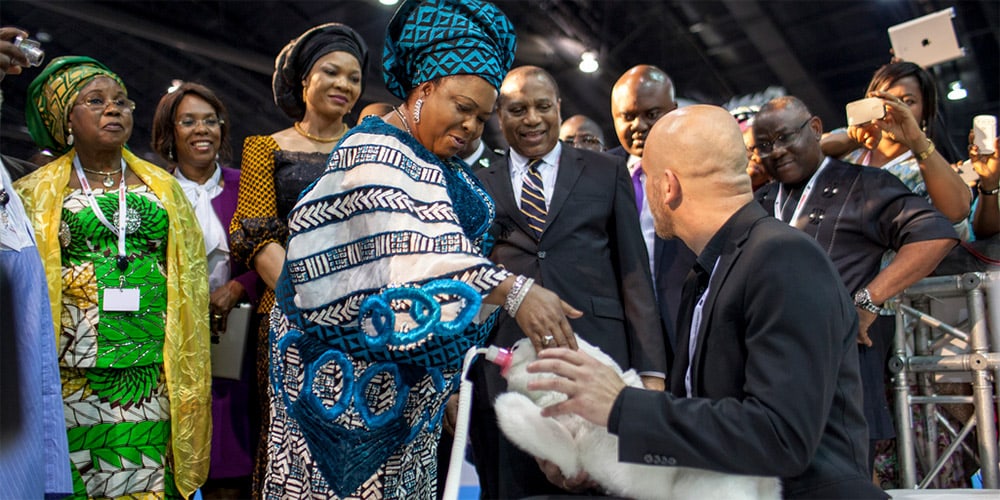 ITU Telecom World 2013, which took place between the 19th and the 22nd November in Bangkok/Thailand, was a great success – not only as a conference. Ars Electronica Export curated the exhibition The Lab which presented different artistic positions related to the topic. Philipp Huemer was one of the Infotrainers who travelled to Bangkok from Linz, and this is his report on the largest telecommunications event in the world.

“Who , me?” – this was the question we all three asked ourselves when we were informed that we should travel to ITU Telecom World 2013 in Bangkok to present “The Lab” , a project of Ars Electronica, as Infotrainer. Strangely, we had previously rarely or never worked together at the Ars Electronica Center, which placed high hopes on our journey: Would I be able to sleep for five nights with Mathias in the same hotel room? Spending 24 hours a day with each means tackling things like eating and sleeping habits as well as their side effects , which for everyone of us was not always easy. So we started on November 17 in the early afternoon on the main train station of Linz. Katharina, Mathias and I – one having a good command of Thai language, a birthday child and one who was looking ahead to his fifth stay in Thailand’s capital. 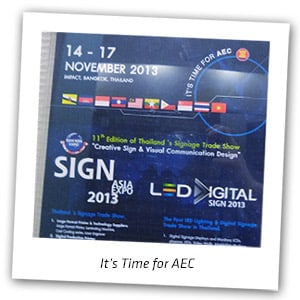 The title of this article is the formulated plan of the platform to create an Asian economic region modelled on the EEC, the  Asean Economic Community or AEC (see photo). After punctual landing in Bangkok-Suvarnabhumi we jumped into a taxi and had our first disillusion. I had located the wrong Novotel and so we were not stationed far away from Bangkok Downtown (Silom) but far outside on the opposite end of the city airport. Anyway, somehow we would experience our evenings in Southeast Asia’s pulsating metropolis, undoubtedly our fixed plan for the few hours of free time per day which we could hope for. 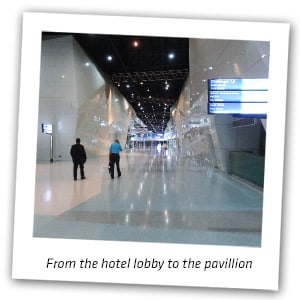 Arriving at the hotel about 2 pm local time, for 4 pm an introduction and training in the LAB was planned in the huge halls of the IMPACT Arena. Even the way there gave a glimpse of what we could expect here: without leaving the building, it took about 10 to 12 minutes a day to cover the distance from the hotel lobby to the exhibition hall. It could be compared to an enormous airport, including baggage check and control points.

Then the first impression of the ITU Telecom hall itself : Immediately upon entering an optical tidal wave in the form of the Thai king pavilion was setting in – gold , glitter and gigantism in perfect exhibition architecture.

Interestingly, North America and Europe had not much to offer on this floor, apart from the organizers of ITU Telecom itself. The main representatives of the telecommunications industry came from Asia and the Arab countries. Many Central African pavilions gave an impression about where CEOs have set their focus of interests, from infrastructure to know-how. In the middle, an exhibition stand as raw as aluminium trussing, barely disguised, a construction site as a symbol of transparency and movement, for development in the original sense, without pomp or gloss, a workspace – the Lab! 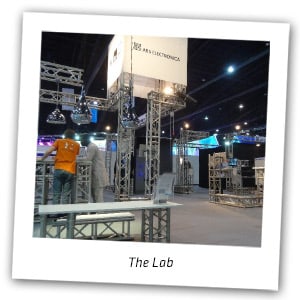 We were pretty flabbergasted. So here and in THIS way we want to stand the dance of the vanities? It would prove to be the best way. After briefly shaking hands with Karl Schmiedinger, the technical director, and Regina Sipos, who was responsible for the area, called the “Innovators Space”, we spontaneously took the initiative as Martin Honzik was the victim of an air shift. Based on the experience at the Ars Electronica Center and the information material prepared by Veronika Liebl, we started training on our own about 10 Thai workmates who would be at our side in the coming days.

In addition, we received quite funny stories about the various technical problems and communicational challenges for our technical team during the previous week, and how they had managed to bring everything somehow to play that hadn’t seemed possible in the first moment. The technicians had supplied more than their required work, this was troubleshooting with simple means at the highest level! 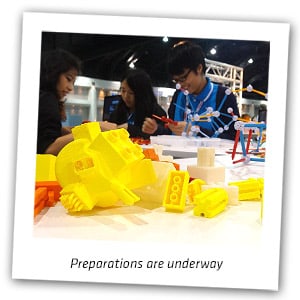 As a team we were solution-oriented. In an environment that is entirely different from our European world this is not a disadvantage. The time was well used, all were halfway “on subject”, our helpers also seemed motivated and inspired by the otherness of our project. The mood was always very good. We all had the feeling that we could rely on each other.

The next morning, the inflammatory speech by Martin Honzik: project meeting in the morning and the largest, THE burning question: What are we doing here? Martin gave an answer that turned on our switch: “We are here in a Gallic village, we are the only ones here who sell nothing but good stories and inspiration. This is our weapon and we will get them all! “Maybe not in exactly those words but this was the content and thus the slogan was issued. We had already hoisted the sails for open source , file and mind sharing, storytelling and inspiration through the interplay of art, technology and society in the “Vent of Data”. 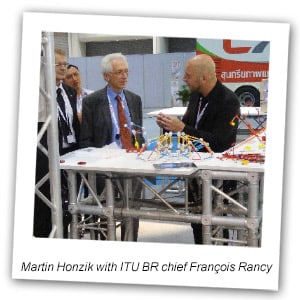 What was happening then the next four days was equivalent to what is referred to by Urban Gardeners as “seed bombing”. Whoever entered The Lab left intellectually fertilized again. No one could believe that the objects and installations were not exposed for sale, and that they were constantly being kidnapped by us to meta-levels. It was wonderful to see people, whose primary interest in this social gathering was for the next 100 million dollar deal, standing there with astonished eyes like children with dollar signs in their eyes.

“Individual Prototyping”, the focus of Gustavo Valera, who transformed his ideas of 3-D printing to demonstrations on spontaneity, creativity and individualism in general sense, seemed to literally shake the world pictures of some visitors. Above all, because, as a tool, he used a dirt-cheap 3-D printer, the Maker-Bot.

The possibilities of using the BCI, available only as a mock-up in different versions, astonished the head of the ITU so much that he extended his short visit ultimately to about three quarters of an hour to think for himself about usage forms and stood stunned when  Martin presented the shooting star of The Lab: “Gravity Light” – the winning project of [the next idea] voestalpine Art and Technology grants this year, an assembly of simple art techniques in a novel form, captivating in its simplicity, so one has to wonder why such a thing doesn’t already exist: in principle, it is a pendulum system like a mechanical clock, only that there is no clock work but a generator is operated with it – once raised, a bag filled with whatever pulls a band for about 30 minutes through a coil – electricity by gravity! Hitchhiking and camping without a battery! 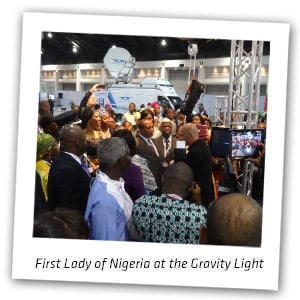 Again, it’s not the solution of our Western “energy problem”, but a substantial alternative for individual needs especially in rural areas. Especially for the retail price of $ 5 each. About a third of the exhibitors at ITU come from Africa, about half of Asian exhibitors come from poor countries and / or countries with infrastructural deficiencies. And so you can imagine what has triggered this idea in the minds of CEOs, ministers or presidents. Since human resources are available in just such areas sufficiently, it is easy to spin the idea of Gravity Lights forward: Take a large generator, weights which may have to be lifted by 10 men, but afterwards generate enough electricity to supply a small village with light, or depending on the torque also operate electrical equipment! 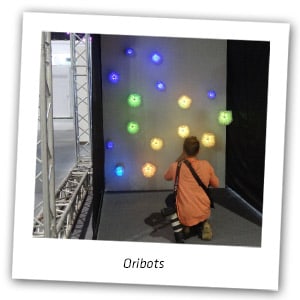 Moreover, many visitors were attracted by the primary aesthetic play of Oribots by Matthew Gardiner, as they were also seen in the Ars Electronica Center. The form of presentation attracted much more attention, as people almost like moths flew to its light, and so a constant giggling and lots of “ahs” and “oohs” from the direction of Oribots could be heard. We often simply had to tell the context of tradition (origami, folding the umbrellas) and modernism (3- D printed parts), and another one was infected: “What else do you have to show here?” 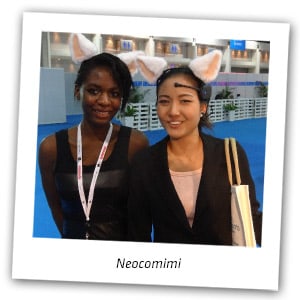 Well, apart from old acquaintances such as the Spaxels of Futurelab, the Transparent Specimen, Necomimi, Paro and Kazamidori, I found the “Blind Robot” by Jean-Phillipe Demers still very interesting: he also plays in this installation with questions about the tolerable huminoidity of robots, based on the question, what does it feel like when robots develop something like sensibility and touch us tenderly, or, like a blind man, feeling with the fingers. Interesting to note how much the cultural background is reflected here, where and how we want to be touched and what we categorize as unpleasant, and the associated thought of how well would a robot have to operate, for example, as a nurse. With appropriate documentation this art project probably could also be explored from a sociological point of view. 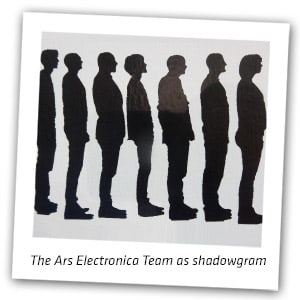 With the continuous progress of the days we transformed to a closed unit, everyone supported each other, we all talked a lot and in the Production Office invitations and business cards piled up. Ultimately, none of the responsible persons cared that the press event on one of the last days had to be cancelled, the success of the show could already be seen before. 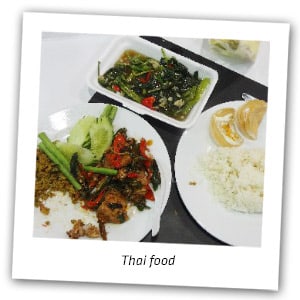 The evenings we spent with visits to the city center. With delicious food (it may be that Thai food is one of the best in the world?) and good tasting drinks we exchanged ideas and motivated each other for the next day, the trio, with the technicians, two artists and also with the local volunteers who guided us through corners of the city where any tourist would arrive in the first place. The last day we took advantage of visiting the Chatuchak, the largest market in Southeast Asia, a therapeutic massage in the traditional school in Wat Pho (Wat = Buddhist temple), and a final dinner with technician Simon, artist Gustavo and two of their Thai friends before we then returned home from our journey. 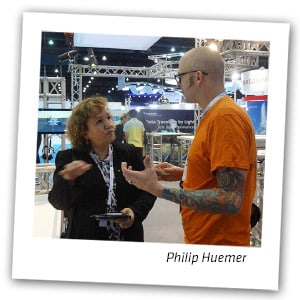 Conclusion: 9.6 out of ten for The Lab (the best part of the pursuit of perfection is the knowledge to always make it a little better next time) and thank you for the trust!

Philip Huemer is Infotrainer at the Ars Electronica Center Linz.