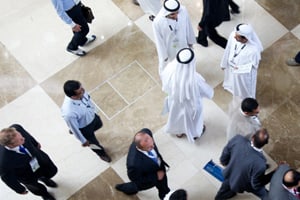 Albert Einstein sometimes used to torment his students at the Institute for Advanced Study in Princeton. During a period of dramatic changes in physics he would set an exam paper containing exactly the same questions as the previous year. When challenged about this he remained unrepentant.
The questions may be the same as last year, he observed, but the answers are now different.

Just like physics in the middle of the last century, the ICT sector is currently undergoing a period of dramatic transition. And, again like physics, the end points of that transition are unknown. Just a few years ago life was so simple. We bought telephony services from the telephone company. We watched TV transmitted by the broadcasters. We left the internet to the scientists.

Today it’s so different. Today millions of people get their telephony services from TV broadcasters or internet service providers. They download TV programmes from the telephone companies and not only watch videos but also send out their own videos over the internet.

Usage of social media has dramatically changed the way people interact and communicate. Instead of direct person-to-person communication, in the digital world people are increasingly communicating through YouTube or Facebook comments and Twitter tweets.

Within the ICT sector today, everyone is after everyone else’s business. Services are arriving “over-the-top” (OTT), under the floor and round the side. The ICT world is changing.

For the players in the ICT sector – new as well as old – the fundamental questions remain the same. How do we remain competitive, deliver customer value, make money, and so survive? But the answers are changing as new technology breaks down the previous relationships between services and delivery mechanisms, and as new players with entirely new business models burst onto the scene.

The debates were illuminating and constructive, reinforcing the importance of ITU Telecom World’s role as a neutral platform for all stakeholders in ICT – whether from public or private sectors – to share knowledge in an open collegiate environment.

Bringing together the public and private sectors is a key feature of the ITU Telecom World series. These are networking and knowledge sharing events open to all stakeholders. They do not formulate rules or propose treaties. But they do further understanding and cement relationships. They track the continuing evolution of the answers to the fundamental questions we all face.

Sessions at ITU Telecom World 2012 were webcast in their entirety. You can view them at world2012-live.itu.int. A summary of the significant, and sometimes surprising, conclusions from the debates has just been published in an Outcomes Report, which you can download here.

ITU Telecom World 2013 in Bangkok will again provide a neutral platform for all concerned to review the new answers that have emerged. I hope that all concerned will take advantage of this opportunity. Now more than ever it’s vital to continue sharing knowledge, experiences and ideas in an open and honest fashion.