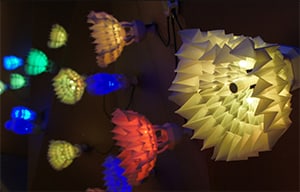 Many aspects of life as we know it are being revolutionized by new technologies – and new ways of using new technologies. This is a change that goes far beyond gadgets and geeks, a change with the potential to uproot business models, daily life and society itself.

As curators of interactive exhibition space The Lab at ITU Telecom World 2013, our aim is to illustrate the impact of this technology-based revolution through practical or artistic cutting-edge applications – and to better understand the nature of the future.

No single factor or development is behind this change: it is the conjunction of several elements that makes it so exciting and far-reaching. For example, proprietary systems are now a thing of the past. The magic word of the future is “open.” In tomorrow’s digital marketplace, there’ll be no place for hermetically sealed-off claims of individual providers. Everything is growing together into a vast ecosystem where developers, providers and end users roam and romp worldwide.

Here, “plug and serve” solutions are fed in and offered up, demanded and purchased. Everything and anything can be quickly and conveniently loaded to all sorts of mobile devices, whenever and wherever they’re needed.

Additional impetus is provided by a current development that is nothing less than revolutionary: the so-called internet of things. Nearly all the technical devices and accompanying paraphernalia we use on a daily basis will soon come equipped with sensors, cameras, chips and microprocessors, and be able to be started, operated and updated via the Internet. The quantity of data that will then constantly careen around the Web will be truly gigantic.

The foundation of this digital ecosystem is extremely high-performance, totally pervasive infrastructure that offers everybody optimal network access. But it is equally indispensible that the right balance is achieved between, on the one hand, saving and evaluating user data and behavior, and on the other hand, protecting people’s right to privacy and data security. This is something that won’t just be in the interest of the end user but also of the economy itself, since a lack of trust in the Internet will have a growing—and increasingly negative—influence on potential turnover on the online marketplace.

In the context of an open lab situation, Ars Electronica has assembled artistic commentary on this radical transformation process. We present best-practice examples at the nexus of art, technology and society that show the opportunities and risks that the economy, science, politics, art and whole societies could soon be facing.

This is a matter of new forms of communication and participation, new types of artists and scientific disciplines, unconventional alliances, and business models with great future promise. We throw a spotlight onto the enormous potential of technological innovations and, thus, the changed relationships of power in political and economic life that will inevitably accompany them.

Experience it for yourself at the InnovationSpace Lab on the showfloor at ITU Telecom World 2013 – interact with the future.