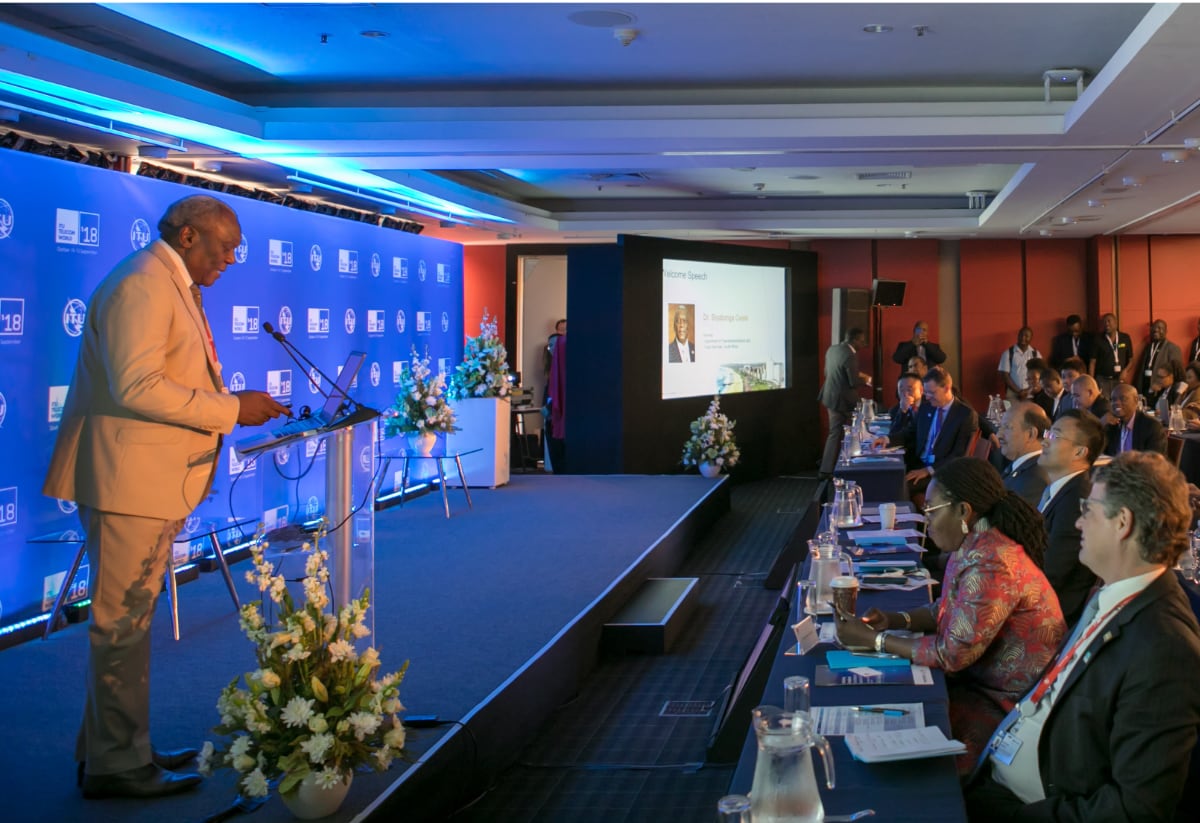 Welcoming participants to the joint Forum, the MC observed that broadband is changing the way we live, work, produce and even reproduce!  A chief in an African village was even more pleased that operators were providing him with connectivity, rather than water. Today, people can survive 24 hours without running water to their house, but they cannot survive half an hour without broadband!

In his Opening Remarks, Mr. Houlin Zhao, Secretary-General of the ITU, acknowledged the honour of participating in this Joint Forum. Digital technologies are changing our lives, economies and societies. This transformation holds huge potential to change people’s lives and achieve each and every one of the SDGs. He described the “4 Is” – infrastructure, investment, innovation and inclusivity.  According to Huawei, 20% increase in ICT infrastructure could result in a 1% growth in GDP. He announced the launch of the latest Commission “State of Broadband 2018” report. In some areas, Africa is left behind, but in other areas, Africa is getting ahead, e.g. mobile money.

H.E. Siyabonga Cwele, Minister of Telecommunications and Postal Services of SouthAfrica, spoke about the deployment of telecom equipment in South Africa. Countries have developed broadband plans in earnest, and broadband is vital in moving countries to higher growth trajectories.. However, delivering high speeds consistently is complicated and costly and new technologies open up new domains of privilege and exclusion. Digital users are more than users, they are now content creators as much as they are content consumers. We need to empower people through ICTs; we need to foster digital inclusion, which can be achieved by providing basic access to communities, with a range of digital content, and providing digital literacy services; and providing programmes and services around key services. Many assumed that the rise of mobile broadband would spell the demise of fixed broadband – but the reality is more complicated. WiFi offload is actually giving fixed backhaul a more prominent role than many assumed.

Mr. Jianjun Zhou, Vice-President of Carrier BG, Huawei Technologies Co., Ltd, described the Huawei vision and mission to bring digital to every person, home and organization for a fully connected, intelligent world. Huawei has established a dedicated office for emerging markets with a business programme to connect the unconnected. According to Huawei, 3.4 billion are without Internet access, of which 830 million people live in Africa. Globally, there are 870 million people without mobile connection, of which 660 million are in Africa. Globally, there are 1.1 bn households without broadband connection, of which 242 million are in Africa. Challenges include lack of infrastructure, low levels of literacy and low population density and RoI. Broadband deployments are a shared social responsibility.

Mr. Edward Zhou, Vice-President of Global Public Affairs at Huawei, stated Huawei’s belief that investments in ICT infrastructure will significantly improve economic growth and society. Using data from 125 countries for 2010-6, there were good improvements in health and education. Government should act as an enabler to create a favourable policy environment. Competition is very important – some countries in fact have too many operators, which can damage the whole ecosystem; 2-4 operators is a healthy number of operators. He announced the official release of the Position Paper.

Dr. Mohamed Madkour, Vice-President of Wireless Networks Marketing & Solutions at Huawei, suggested we are talking about the hope of every African person to live safer, happier and wealthier lives. The hope of every country to eradicate poverty and grow their economy. We can talk about 5G and AI in Africa – this is the time to prepare for 5G. He described Huawei’s Rural Star solution for bringing wireless connectivity to rural areas. Dr. Madkour added intelligence as a fifth I to Mr. Zhao’s four Is.

H.E. Hon Ursula Owusu-Ekuful, Minister of Communications of Ghana, acknowledged that broadband cisa civic right. Kofi Annan stated that universal access is a key enabler for ending poverty. Ghana is working on a Digital Ghana Agenda and the USF Administrator, the Ghana Investment Fund for Electronic Communications to provide telephony, multimedia and broadcasting services. The growth in teledensity in urban areas is creating a new widening digital gap between urban and rural areas. There are almost 2,000 communities in Ghana without mobile signal. We intend to increase telephone subscribership to as many of our communities as possible. 100 communities have now been connected, where access was not previously available. This year alone, 80 sites have been completed, and we are on course to connect another 200 sites, with MTN and Huawei. Rural star was developed in Ghana and got them to work in partnership with GFIC and MTN to develop this solution. We will connect 200 sites in 2 years, rather than 117 sites in 8 years previously. Ghana has launched the Coding for Kids programme and trained 600 girls, and launched a National Digital Property Addressing system and e-ID programme to boost the formalization of our economy, andis  using blockchain for land registry. Ghana will take all necessary steps to ensure that every citizen can get access to the Internet and an inclusive society.

Mr. Rob Shuter, MTN Group President & CEO, described how MTN has a great passion (Y’ello) to bring more and more customers to the power of the Internet. MTN has 220 mn customers, but only 70 million are active data users >5MB/month. Five challenges need to be overcome: (1) coverage; (2) data-capable devices (basic handsets); (3) affordability; (4) service bundling; and (5) Education & ease of access – CHASE. 2G coverage is high – 90%+. Data coverage setting aside GPRS and EDGE, the snail-speed, 3G is only around 60% population coverage. He described the RURAL STAR programme, pioneered in Ghana, by Huawei with MTN.

Ms. Sonia Jorge, ED of the A4AI, discussed affordability issues. A4AI works to ensure that everyone has affordable access. The Internet is a public good and a basic right.

Ms. Gisa Fuatai Purcell, Acting Secretary-General of CTO,described the work of the CTO in 63 countries. She described the “As” of the digital age as: access; awareness; affordable; advocacy and assistive technology. Connectivity to the home has exactly the same issues and focus as other issues.

Mr. Joe Hironaka of UNESCOexpressed UNESCO’s appreciation of the work of the Broadband Commission and described UNESCO’s ROAM principles: Rights, Open, Accessibility and Multi-stakeholder. There is a new extractive industry with data, and we are building the most incredible social construct (the Internet).

Ms. Phillippa Biggs, Senior Policy Analyst at ITU and Coordinator of the Broadband Commission,described the “State of Broadband 2018” report and how 159 countries (80%) of countries have now introduced National Broadband Plans. Governments can take a number of steps to enhance access to broadband. Internet is definitely not free – consumers pay for Internet with their data, their clicks, attention and time. Governments must plan for some of the risks of the digital revolution, or they may end up promising youth jobs which simply don’t exist! She thanked the whole Huawei team for organizing the joint Forum.

Ms. Samia Melhem, Global Lead of Digital Development at the World Bank, described the importance of institutions. The key is the top-down policy and financing. The World Bank hopes that Africa will transform itself from paper-based public institutions which worked 100 years ago. If you look at the lower two slides, you will see a lot of coming together. Identity data is essential. The World Bank has a Digital Economy Strategy with different foundational elements – digital infrastructure, skills and usage.

Mr. Matthew Reed, Practice Leader of the Middle East & Africa at Ovum, described how operators are turning to fixed wireless access (FWA). He described the FWA opportunity in developing markets. Fibre networks take ten years to produce RoI (Payback period), but FWA takes five years. There is a growing number of use cases for FWA.