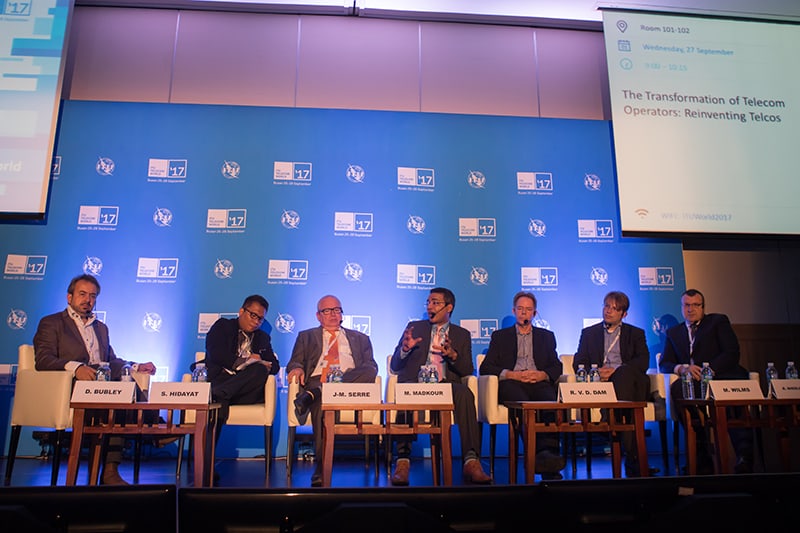 Disruption in technology, networks, processes, and people, pressure from new, internet-based competitors and the need for new approaches to policy and regulation. Telcos are under existential pressure to adapt on all sides, to transform or reinvent themselves – even if it is unclear what the end goal of that transformation may be.

Telcos have been constantly evolving, from the remote sending of messages or voice communication by telephone to today’s focus on connecting computers to people via devices or the cloud, suggested moderator Dean Bubley, Founder and Director, Disruptive Analysis. What comes next?  What do telcos want to transform into, and what challenges do they face?

Transformation itself is not an objective, claimed Mohamed Madkour, VP of Global Wireless Networking Marketing, Huawei, but rather a journey of changes that need to happen, and to happen now. “Telcos have to transform for business sustainability as their old model is no longer suitable for our lifestyles,” he said, but face two major roadblocks: balancing long-term goals with short-term financial performance, and cultural resistance.

His recipe: “Get the most out of what you have, out of spectrum, infrastructure, network, human resources. Then get higher efficiency. Then be agile offering the right services at the right time and place to the right customers.” The most profitable new services, he suggested, will be IT enterprise technology, video and IoT, meaning telcos need to leverage video as a platform and then bring in vertical industries through cloud services.

And the advent of 5G, transformational by its very nature, will force investment – and force transformation, in telcos but also in regulatory and policy approaches throughout the industry.

For Saiful Hidavat, Director of Telkom Group Transformation Project for Telkom Indonesia, transformation is not about the technology but rather about how a telco does business and how it changes its culture to enable it to meet users’ technical needs.

In Telkom’s case, the answer has been to digitize internal processes and change operational efficiency to provide more customer experience, and to explore new digital business. This may be done internally, cherry-picking innovation, investing in customers in new types of businesses such as transport or financial services, through internal startup ventures or through integrating with others.

But for Hidavat,  “the most difficult change is cultural. We never talk about user-centric approaches or leveraging the data; the most difficult thing is dealing with KPIs in telcos, which is what investors look at.”

Rob van den Dam, Global Telecommunications Industry Leader for the IBM Institute for Business Value, echoed the importance of customer experience in a reinvented telco, “providing what customers want, what disrupters want, and working in ecosystems.”

One of telcos’ greatest fears, he continued, is of “Uber systems”, competitors coming unexpectedly from outside the industry and totally flattening revenue with a new business model – a fear that Bubley agreed was justified, citing the example of Whatsapp destroying SMS and with it a huge telco revenue source.

Robert Middlehurst, VP for International Regulatory Affairs at Etisalat, saw it less as a transformation than another step in an ongoing process of evolution. It is important to move forward as an industry, he said, not just as a telco, government, regulator or vendor, but all together to find a solution.

Where should telcos look for new models and revenue streams? Van den Dam found that telcos most favoured a future role as platform provider, with IoT as a future source of revenue – but there are no clear monetization models yet.

Pointing out some of the difficulties, Middlehurst said, “As a licenced operator, we have constraints that other players don’t have, so the problem is how to monetize certain areas of business.” These constraints include licencing, spectrum and tax regimes which leave telcos desperate to pass on costs to consumers, yet unable then to compete with new market players – and at a time when heavy investment in new networks is called for.

In addition, cloudification of services and network virtualization mean companies have software defined networks at international level with centralized management, but regulation is specific to each country, so that “economies of scale are restricted by limited or narrow-mined regulatory environments, and we can’t compete.”

Telcos have neglected for too long monetizing the IP transport, claimed Maikel Wilms, Director, Boston Consulting Group. Traffic volumes may be growing hugely, but revenue is declining or stagnant.

“Telcos are under pressure as the industry ecosystem, including government and regulators, has not succeeded in getting adequately compensated. The key question is to get a monetization scheme in place giving adequate ROI,” whether investment in future networks is in fibre for gigabyte of 5G.

“In Europe, over USD500 billion investment will be needed in the coming years. If you don’t change the economics, it will not work,” he continued.

Establishing the role of telcos in an internet ecosystem is another challenge, complicated by culture clashes and the difficulties in attracting the right talent. “Talent doesn’t go to telcos. If you want to play up, you have to think about attracting that kind of talent.”

Serre urged telcos to “ focus on helping companies to be actors in transformation, to change management, to be open in the way of coping with the world”, concluding that retraining the workforce in cloud, AI, data modelling analytics, is a major challenge.

For Huawei, connectivity is the key to telco success, and will play a much larger value role with 5G, providing higher efficiency and massive connectivity through the IoT. It will be a core asset but must be more efficient and deployed with cloud services.

Wilms argued that “connectivity and cloud are abstract terms, you have to dissect into assets or capability in order to monetize, identifying which unique assets you can monetize and how. You have to differentiate, to be clear where you invest.”

Customer relationships and access to customer data were two key telco assets, the panel agreed, although telcos may not be making the most of either at present. For Bubley, operators do not have a good enough connection with those customers, have not got into their mindset, and ultimately, “there are not enough designers in the telco industry.”

Service transformation through augmented and virtual reality, network slicing on software defined networks and the advent of AI will have huge impact on telcos in terms of infrastructure, services, monetization models and an urgent need to review regulation.

One way or another, transformation cannot be avoided; how telcos cope with changing culture, innovating services, focusing on customers and redefining their role in the ecosystem will be an interesting story.