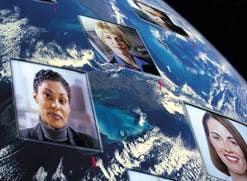 The world of voice communications is changing. A new technology called WebRTC will further accelerate the pace of change.

In the past, almost all voice was in the form of standalone “phone calls”, based on the global E.164 numbering scheme, full interoperability and a subscription-type service relationship between customers and their respective operators. Each operator controlled the legs of phone calls running over its own network infrastructure, with switches as an integral part of the whole system.
Now, this is changing in many ways. We have seen a shift to various forms of VoIP, both inside operators’ networks, and across the Public Internet and corporate private networks. The “call control” and “media transport” aspects of telephony have been separated. We have seen the emergence of so-called “OTT” players offering (approximately) telephony-equivalent capabilities to consumers and businesses. Smartphones, 3G/4G networks and a vibrant app economy have extended VoIP to mobile, dealing a serious wound to SMS along the way.

Official standards-based alternatives such as IMS/VoLTE have been slow to emerge as a defence; some operators have chosen instead to partner with Internet/app players, or develop their own “Telco-OTT” alternatives. If you can’t beat them…. join them. (And no, definitely not “joyn”).
We are also going “beyond the call”, redefining the whole notion of “voice”. Some games or business applications are using their own embedded “voice-chat”, while other non-telephony use-cases range from medical diagnostics of breathing patterns, to mobile karaoke. The range is expanding, although volumes are comparatively small – these applications require specialist technologists to create them.

All this has accelerated anyway over the past 3-5 years. But now, an extraordinary additional disruption is appearing on the horizon and approaching very fast indeed. WebRTC (RTC standing for “real-time communications”) puts easy and high-quality, encrypted voice and video directly into websites and mobile apps – not just for calls, but able to be integrated directly into the specific experience. No plug-ins; your browser just turns into a phone, the way it has already turned into a TV.

WebRTC allows millions of ordinary web and app developers to experiment with new forms of voice (and video) communications – and new business models. There are applications for enterprise communications and telecom operators too – from cheaper/better contact centres, to the extension of IMS services over the web itself. Although it is still being standardised, it is already being deployed aggressively. If you have a Chrome or Firefox browser on your PC, the capability is already there. By the end of 2016, there will be around 4 billion WebRTC-capable devices, both desktop and mobile.

Voice – and telephony – is moving from being a definable “service” to becoming just a feature or function inside dedicated applications – from social networks, to enterprise CRM, to the app you use to book a taxi or check in for a flight. Often it won’t be billed, or associated with “identity” in the normal sense.

There is a need for regulators and governments to address this move away from “phone calls” to a mixed, dynamic, heterogeneous future of voice. Rules on “minutes”, “interconnect”, “numbers”, “lawful intercept” and so on are rooted in 100 years of telephony history, and are now looking narrow and obsolete. This mandates immediate and deep attention by the whole industry – and WebRTC only increases the urgency further.

A workshop at ITU Telecom World 2013 in Bangkok on 20 November at 10.15am will discuss the impact of WebRTC (and other innovations such as “Hypervoice”) on the Future of Voice. Click here for further details and see the full event programme here.