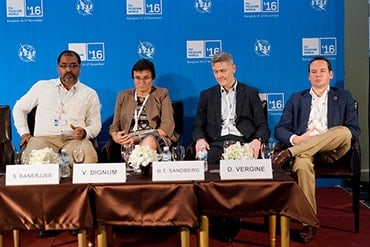 A potentially exciting future lies ahead, stemming from AI developments. But first we must define our position in a number of areas including how it should be used in the workplace or to what extent AI can or should be used to predict the future. These and other key questioned were debated by an expert panel line up at the AI: Is the future finally here? Session, moderated by Global Industry Council Founding Chair and IP3 Board Vice Chair Stephen Ibaraki.

noting that in a world where increasingly vast amounts of data are being generated, the big AI challenge we are facing is how to interpret this data, and also how can we utilize AI innovation across other industry domains? Despite the broad label of “data” Dr Lee reminded us that each piece of data is different. It maybe small yet highly significant. Crucially he also reminded participants of the potential AI had to support the SDGs, in a host of areas from human health to commerce, migration or more.

Opening the debate, Ibaraki spoke of how AI was now one a top global trend. In a world where anything can be automated, he also noted the potential of AI to support the SDGs.

Although there are clearly areas where human intervention is and will continue to be needed according to Sauvik Banerjjee, Global CTA & Innovation Lead, SAP Asia “We are making our machines smarter by giving them automotive capability to understand and perform more efficiently.” AI still could enable greater efficiency, he said, citing an example where SAP is doing research into using AI’s predictive capabilities in the developing world, by providing farmers with a predictive platform to provide vital information on harvests, yields and crops.

Ever increasing machine and data capabilities are all contributing factors to AI growth, but it is still down to humans to understand how AI will influence our lives. Human responsibility for AI is key, according to Dr Virginia Dignum, Associate Professor, Technology Policy and Management, Delft University of Technology, “We are responsible for determining how we will use machine capabilities, intelligence that machines can provide us.”

Bjorn Taale Sandberg, Senior Vice President, Telenor Research, Telenor, echoed the need to educate people in AI. The challenge is machine learning, although AI is creating a whole set of new opportunities for different players to establish themselves. Telcos, for example “Need to look at areas where the data is starting to flow.”

AI will only be intelligent if we use it correctly according to Vergine. The correct policies, people and approaches will be essential in helping AI be used optimally. “Not a technological barrier but is a matter of the policies, governments not being there yet. How do we ensure these technologies are used wisely to achieve the global goals?”

The panel moved on to discuss core areas where AI could have major impact.

Despite fears of a “Matrix” like scenario, where machines take over or – perhaps preferable- a Star Trek like scenario where we are inundated with leisure time, we don’t need to expect a complete takeover, according to panelists. Technologies are still built for and used by the human workforce, according to Bannerjee. Human intervention will still be required, and will go hand in hand with AI. Assuaging concerns of disappearing jobs, Dignum pointed out that many jobs that were around 100 or 50 years ago have now disappeared and new ones appeared in their place. While we can expect some jobs to disappear, and unemployment may go up, new jobs will appear in their place. Our personal identification may go with the job- “we are what we can contribute to the world” be that work or not.

Computers plus people are more superior than people alone, according to Telenor’s Sandberg. Ultimately, computers will be our “servants and helpers” Nevertheless, there will be a transition period and the challenge will be to manage this transition.

Looking to the future

Throughout history, people have have feared what the future held. We need to look at the positives that AI holds for the world, according to Dignum. These may be greater for LDCs than in developing countries, noted Vergine, where AI could help potentially predict and help mitigate problems such as a bad harvest. Prospects for AI are undoubtedly positive but there will be an understandable period of disquiet on the way.

The concept of whether AI should- or would be used to predict the future was widely debated by the panel.  If AI can predict things 2 years in advance can it change what happens? According to Dignum and Bannerjee this depends on the accuracy and quality of the data. Predictions – such as predicting weather patterns in vulnerable or volatile countries- can only be successful if they use good quality data. After all AI, according to Sandberg “can only predict from things that have been seen.” On the question from the audience as to whether AI could ever be used to replace policy, Dignum noted that this was unlikely as we will feel “less responsible” She also noted that AI could only provide “predictions and not certainties” and were very much dependent on the data that was used.

Panellists agreed that international cooperation in a host of areas including data sharing, movement would be essential to build a positive AI future, and a “dissolving of boundaries between traditional sectors” according to Dignum.