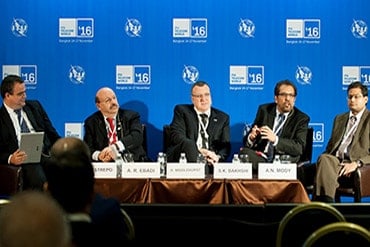 Do we really want to connect everyone, everywhere at the lowest price possible to the consumer? And if we do, do government and regulatory policies play as large a role as technology itself?

These were the questions emerging from an open and engaging debate framed by the challenges involved in bridging the digital divide – from finding the right technology mix to the additional barriers of better use of spectrum, local content, capacity building, restrictive or outdated regulation, and the basic issue of lack of electricity.

The secret, as ever, lies in public and private collaboration. Both sectors can work together to serve different needs, according to Ali Ebadi, SVP, Space Systems Development & CASBAA Representative, MEASAT, with government focusing for example on education, improving rural standards of living and providing direct access to market information for agriculture and small producers. Telcos need to provide infrastructure and services through a whole system of technologies combining high thru put satellite, terrestrial, wireless and distribution through broadband.

Whatever the technology used, power is a fundamental concern.  The more rural a location, the more difficult it is to put in a tower and then maintain it, stressed Robert Middlehurst , Vice President International Regulatory Affairs at Etisalat. Without access to main grid power, operators must fall back on generators with high, and often unpredictable, fuel costs. “Power is the first issue which restricts how we can manage expansion to the masses,” he said.

Telcos are caught in the trap of providing utility services whilst attracting commercial tariffs, continued Middlehurst. And as Universal Service Funds often remain limited to the fixed network world for which they were designed, there are potentially enormous funds available for investment in connecting the unconnected through other technologies, in particular mobile, which are currently lying fallow. Revising government and regulatory policy is essential.

Breaking down the silos between fixed, wireless and mobile so that services can fit together in a jigsaw of universal access is important, but not easy. Different industry sectors come from different backgrounds, live in different silos, and have different world views – the contrast between the borderless, young, nimble internet players and the telco world with its years of interconnecting standards, relationship building and parochial geography is particularly strong.

Ericsson’s Shiv Bakhshi, Vice President, Industry Relations, raised the fundamental question of what connecting the unconnected actually means. We always assume it is the rural and remote who are excluded, he pointed out, but even in areas where the network is profusely available, there are people who are unconnected because “the internet is not relevant to their lives, they don’t understand the magic that is the phone, they don’t have local content relevant to their understanding of the universe around them.” Add to that a large proportion of those over 70 in developed and developing markets who have little or no interest in being connected, younger children and digital illiteracy or disinterest, and the insistence on connecting everyone becomes clear. “Perhaps we should aim not for connecting the last person, but for making sure that even if people are not connected, they at least have the benefits of internet connectivity,” he said, such as using connected village schools or government services and agricultural extension centres as a point of transmission for knowledge.

He added a warning that focusing on affordable connectivity runs the risk of mixing up consumer interest – very low cost services – with public interest – next generation networks, services and solutions, all of which require investment from an industry dependent on revenue.  “Emaciating the industry which provides the basis of connectivity by insisting on zero costs to the consumer is the opposite of healthy,” he stressed.

Bakshi also called for care in continually demanding new and innovative technology. 3G today, for example, does not mean now what it did when it was first established; and the mobile network, with its history, momentum and the enormous intellectual, financial and emotional capacity tied to its industry, is so vast that “it would be insane not to leverage it rather than discarding it in search of the new and innovative”.

Outlining the difficulty of providing connectivity to the very poorest, in particular in Least Developed Countries, where total potential spend on all connectivity may be as little as 2.5USD per month, Apurva Mody, Chairman and President, Whitespace Alliance, admitted, “It is really hard. Growth cannot come from there.” White spaces can be a solution here as a development technology, in particular in rural areas providing a broadband connectivity to a cluster of villages. But the technology can also be extended to a multitude of environments, such as mountainous terrain, oil rigs or in the middle mile between small settlements in countries such as India or USA.  The issues of interference, and the multiple potential demands on licence-exempt spectrum used by white space, were also discussed – particularly given the possible opportunity cost of not licencing to other technologies.

Replicating business models, policies and regulation from other markets or nations may be provide a source of inspiration, concluded the panelists, but must be done with extreme care and adapted to each individual context. It is indeed necessary to radically readdress legacy policy and regulation, but not all elements need to be rejected, as some principles remain relevant and with a solid economic foundation. There is no single solution, and international forums such as ITU Telecom or WEF are important to create international dialogue and develop a roadmap to take connectivity forward in a mix of models, old and new, and different environments.