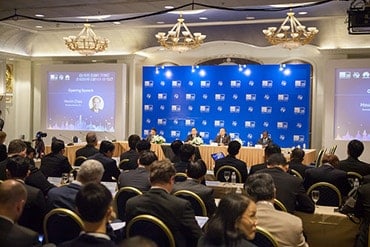 The best ways to achieve accessible and affordable broadband in the Asia-Pacific region were the key areas debated today by an influential lineup of panelists spanning governments, industry and international organizations at the Asia -Pacific regional exchange, jointly organized with Huawei.

Faced with common challenges, including decelerating economic expansion, stimulating sustainable growth in the most populous region of the world, rapid urbanization or natural disasters- to name just some- participants shared their perspectives on broadband network development, the challenges it faces and the opportunities broadband can provide..

“The role of government and industry, particularly in the ICT sector must be adapted to handle challenges and gain optimal benefit from this revolution,” said H.E Air Chief Marshal Thares Punsri, Chairman, NBTC, in his welcome address, explaining how the Thai government is strongly committed to driving the economy and society with this technology.

Huawei’s Vice President, Mr Jin Yuzhi, Vice President, Southern-East Asia Region, commented on how broadband is a “foundational infrastructure, an indispensable part of our lives,” noting how broadband in the Asia- Pacific region has grown tremendously. Nevertheless, it is still below global level and varies considerably. To accelerate development, Huawei proposes that broadband should be elevated to a national stage and governments should take the lead in formulating national broadband plans. Governments should also promote friendly policies to encourage operators to invest in broadband and provisioning a universal service fund. Spectrum allocation must also be sufficient, and governments should leverage ICT development by constructing fiscal infrastructure.

Echoing his sentiments on the importance of broadband, ITU Secretary-General Houlin Zhao outlined ITU’s work in areas such as the broadband commission for sustainable development. Nevertheless, he noted, with broadband network development facing a variety of difficulties and challenges, “We still have a long way to go to make our digital vision a reality.” Investment was required, and public private partnerships were crucial, together with collaboration, in order to stimulate growth in the most populous region of the world.

The distinguished speakers then took to the floor for the Opening ceremony to launch the ITU White Paper on Broadband Regulation and Policy in Asia-Pacific Region:  Facilitating Faster Broadband Deployment.

Presenting the report, Ioane Koroivuki, Regional Director, ITU Regional Office for Asia and the Pacific, outlined how it explores broadband regulatory and policy aspects in the Asia-Pacific (APAC), region with an aim to facilitate high-speed broadband deployment.

Panelists then took turns to share insights into their own broadband plans and initiatives, in a discussion moderated by Sameer Sharma, Senior Advisor, ITU Regional Office for Asia and the Pacific.

Cambodia has established a 2020 masterplan for ICTs, with a target of 70% broadband penetration, with 100% coverage in urban areas. To reach this, according to H.E. Tram Iv Tek, Minister, Ministry of Posts and Telecommunications, a law on telecoms was passed to facilitate the development of the sector and private sector, including the construction of submarine cable to provide a direct connection. The law aims to encourage competition and encourage the private sector to develop an optical fibre backbone infrastructure. A focus on the rationalization of spectrum is also planned, and a possible USO decree.

Introducing the next panelist, Dalsie Baniala, Telecommunications and Radiocommunications Regulator, Vanuatu, moderator Sharma commended the ICT lead taken by the government of Vanuatu and the appointment of a Chief Information Officer. Vanuatu faces a specific set of challenges, according to Baniala in that it is comprised of many islands, making network coverage a challenge. To help meet its target of 90% penetration by 2018, the government is investigating connectivity by submarine cable. Other measures to boost broadband usage include using “community consumer champions,” to pass on information and spread the word on broadband. In order to encourage women and girls online, Vanuatu also has the “smart sisters” initiative which, noted Baniala, is progressing very well and she would like to see more of.

Malaysia has successfully transformed itself into a regional success story, according to moderator Sharma. Key barriers to be overcome, according to Malaysian Communications and Multimedia Commission Chairman, Halim Shafie meant overcoming a “Chicken and egg issue,” whereby the incumbent did not want to put in fibre, which would boost competition. Under the national broadband initiative, public/private sector partnerships were instigated, and clear targets for connectivity were outlined. The next milestone of the project will involve reaching 95% broadband penetration by 2020 and also targets in terms of speed.

Going forward, according to Keng Thai Leong, Deputy Chief Executive, InfoComm Media Development Authority, Singapore is looking at a new generation of broadband plans, focusing not on broadband technology/infrastructure but instead on transforming businesses and people. These focus on a number of core areas; capitalizing data, leveraging data in a competitive way to connect people and creating a flexible regulatory ecosystem.

S. Sharma, Chairman, TRAI, India outlined key components of the Digital India vision which has helped boost broadband penetration, including providing 250,000 optical fiber points, of which 100,000 are already connected, from where broadband can then be delivered further, via the last mile access. Although fixed infrastructure is lacking, some 100m homes have cable tv, which could also be used to transport broadband. In addition, measures such as providing community WiFi also helps provide further connectivity.

Commending the whitepaper, Peter Macaulay, President, FTTH Council Asia-Pacific, noted the need for more gigabits to the base station and fiber to the antenna, although the challenge is keeping cost down. Broadband needs to be viewed as a utility, like power or gas, and “we should be thinking about optical fiber infrastructure that is for multiple uses.” Potentially, an infrastructure shared by service providers in addition to providing fiber to the antenna could significantly cut costs for extending broadband reach.

Providing a European perspective to the debate, Maria de Fátima Henriques da Silva Barros Bertoldi, Chair of ANACOM’s Board of Directors, Portugal outlined the key factors behind Portugal’s broadband growth – such as opening networks to competition from alternative providers, encouraging competition from sectors such as cable, forcing the incumbent to deploy fiber and lastly encouraging the sale of bundled services, fixed voice, broadband, pay tv, mobile voice and broadband.

Mr Bill Lan, Chief NBN Strategist, Huawei, noted that Huawei has and will continue to cooperate with governments and ITU on national broadband strategies. For Huawei, the approach and technology used for broadband rollout in developing countries is different to that of developed countries. The challenge in developing countries has been providing accessible, affordable broadband.  In terms of fiber provision, Government intervention in fiber rollout can help significantly in terms of cutting construction costs and other administration costs. Public/private sector partnerships are crucial also, and governments can also help enable these.