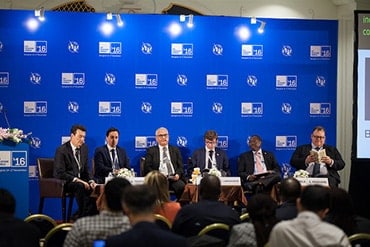 How can we balance the needs of the ICT industry against the needs of the wider society? How should governments and industry work together so that the wealth created by ICTs is split between tax revenue and industry investment to the mutual satisfaction of both parties? This was the key question at the heart of the plenary session “Balancing Financial Incentives to Promote Investment in ICTs.”

Not a simple question, given the enormous impact of digital technologies on the economy, from creating new business to facilitating communication, production and the circulation of goods and services. Particularly given that excessive taxation on digital goods and services could limit adoption. “The taxation of digital goods and services should be approached with care, to prevent any erosion of their spillover contribution to the GDP growth,” cautioned Kemal Huseinovic, Chief of IEE at ITU’s Telecommunication Development Bureau, and moderator of the session.

Governments tend to see the ICT sector as a potential source of revenue to balance public sector budgets, rather than reinvesting in the promotion of infrastructure, deployment and development in the ICT sector. For Tomas Lamanauskas, Group Director Public Policy at Vimpelcom Group, representing the operators’ perspective, the clear contribution of ICTs to GDP and the burden of sector-specific taxation are a double injustice. But it is important to try to understand the situation from the other side – what is the government’s incentive?

Financial pressure on governments has increased as a result of the financial crisis, and is exacerbated in many countries by growing shadow economies – even in Europe, where the informal economy is relatively low, losses in taxation are around 450bn euros. Governments need “to collect enough fiscal resources, and we as an industry must be able to thrive and enable other industries, and big incomes.” Unpacking this tangle will only be possible through better dialogue, he believes.

Knowing the tax rate in advance helps to make it manageable, as will ensuring that all players in the market are treated equally, and transparency in national taxation instruments. There is a huge opportunity it work together to “assign the overall fiscal burden”, taking into account regulatory and fiscal factors, but also the impact on the affordability of services to the user.

As Abdoulkarim Soumaila, Secretary-General of the African Telecommunications Union, put it:”It’s a challenge for government. We think the telecom operator should develop ICTs, but we also need to develop other sectors, and need to collect money for that.” It is down to the national regulator to see how to incentivize investment.

Taxation policies are having a direct knock-on effect in regions such as sub-Saharan Arica and South-East Asia, where 3G coverage is slowing significantly as operators have been forced to reduce investment. Normal tax and sector-specific tax combined can be as high as 45%, removing any incentive to investment in the region. From the government perspective, as oil prices decline, the low-lying fruit of telecom tax revenue is seen as critical to balance budgets – representing up to 25% of the government’s income in some places.

It’s about balancing short-term and long-term perspectives, operators’ need for quicker return on investment as the technology cycle becomes faster against the government’s need to fill the public purse. For GSMA’s Director of Infrastructure Economics, Guillaume Touchard, the most beneficial solution is also the most difficult one for governments to undertake – decreasing taxes. Economic studies have shown, he said, that lowering taxes in the sector actually leads to increased tax revenue, with all the benefits of job creation, business development and, ultimately, new sources of fiscal revenue: “Governments have to be brave to think more mid- to long-term.”

There are actions that government could undertake beyond taxation. Providing free nation-wide rights of way to the industry, enabling operators to access public assets such as roads, public companies and even buildings, will accelerate network deployment. Policies enabling infrastructure sharing and site sharing would reduce the cost of network investment; as could rethinking the rules on universal service funds.

“When operators talk about tax, government talk about profits,” summarized Hichem Besbes, President, Instance Nationale des Télécommunications. Governments are fundamentally always in need of revenue, and the natural resource that is spectrum frequencies can be as rich a source of income as any minerals. On the other hand, ICTs are “a vector for development” in every sector, and “if we allow the penetration of ICT, we can promote and enhance the whole ecosystem”. It is about finding the right balance between short-term revenue and long-term investment, auction windfalls and universal service, operators’ right to make money against citizens’ right to services, the demands of the finance ministry against the requirements of the ICT sector.  “We have to have a common language between financial and telecom people,” he concluded.

Additionally, new market players, applications and services entering the ICT ecosystem and often subject to different regulatory and fiscal measures also have a tremendous impact. The global, borderless nature of internet players has often allowed them to slip between the cracks of existing national regulatory and tax regimes.

“ Taxation falls disproportionately on domestic players when other people use those networks, make a huge amount of revenue, and don’t necessarily follow all the rules,” Scott Minehane, Managing Director, Windsor Place Consulting, summed up. It is starting to change, including tax harmonization in regions such as the European Union, and moves to equalize the competitive market.

In addition, domestic taxation in areas such as spectrum costs and licence fees can be prohibitive; taxing people moving from 2G to 3G to 4G may not be realistic given operators’ need to upgrade to the most innovative technology. “Taxing these types of technology moves actually is a taxation on the future.”

“Creating the right financial incentives for the private sector to invest, but also for the right governmental take is a really difficult question,” said Minehane. Continuing open, multi-stakeholder dialogue is the only answer.