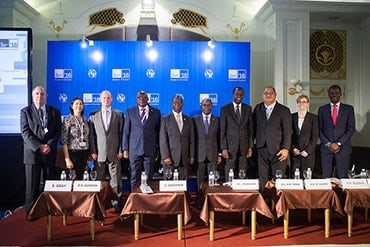 Disasters (earthquakes, floods, cyclones, hurricanes, epidemics etc.) continue to undermine economic development, social development, and environmental protection. Existing and emerging ICTs can mitigate the impact of these disasters thus increasing the chance for countries to attain the Sustainable Development Goals by 2030. An expert, and diverse panel, comprising top level representatives of government and private sector, and NGOs shared their perspectives on optimal use of ICTs in disaster situations.

Ably moderated by ITU’s Cosmas Zavazava, who began the session with a short video showing stark statistics from recent disaster situations, and how ITU has deployed ICTs to help mitigate the devastating aftermath of a disaster. He asked how we can get to 2030 and meet the SDGs with the use of ICTs although reminded delegates that when disaster strikes it destroys economic activities and everything is lost. “Disaster is an equalizer, it doesn’t matter if you are rich or poor, all are affected the same.”

Bettina Quimson, Senior ICT Adviser to Governor, Province of Batangas, Philippines, noted how, in the Philippines, although the government usually brings in food and medicine it look to the telco’s to provide communications. Recent lessons from the Haiyan hurricane showed them how quickly everything was affected, and underlined the essential nature of communications. She explained that they have now made adjustments to ensure they are prepared in future.

Hon Sidi Mohamed Tunis, MP and member of the Parliamentary Oversight Committee on Information and Communications, Sierra Leone provided a perspective from his country, where ITU recently launched a big data project to share experiences and map out strategies on Ebola emergency preparedness, disaster management and early warning systems; and to use ICTs to break the chain of Ebola transmission and support future epidemic response efforts. He noted that “When disaster strikes we don’t know where to start.” Ebola struck with a vengeance, during the 2014 outbreak and people were dying in their dozens. The big data project, used before, during and after the outbreak helped take information to the people themselves. Satellite phones also helped save lives, as many people did not have mobile networks to share information. For disaster situations such as Ebola, “using big data is an answer.”

H.E. John M. Nasasira, Chairman, ITU-D Smart Sustainable Development Model (SSDM) Advisory Board, Uganda noted that his country has been “relatively lucky” regarding disaster situations, although does suffer from devastating floods. ITU has helped establish a flood system and control centre.  In his capacity as Chair of the ITU’s SSDM advisory board he noted that the work of SSDM is to help ICT for development work hand in hand with ICTs for disaster, and this was launched in 2012. The second cycle of work the board is around networking, encouraging volunteers to set up a network to be on hand to provide assistance during disaster scenarios.

H.E. Monise Laafai, Minister of Communications and Transport gave a perspective from Tuvalu where climate change is wreaking havoc due to flooding. Steps that need to be taken to mitigate disaster include cutting red tape, being more effective with legislation. Infrastructure must be resilient also, and investment in infrastructure is needed. He called on delegates and panelists to “help save Tuvalu,” and in doing so to help save the world.

Giving a perspective from the point of view of satellite, Simon Gray, VP of Humanitarian Affairs, Eutelsat noted that the 4 main satellite fleets are investing in satellites over sub Saharan Africa, providing much needed extra bandwidth for the region, enabling end user prices to be cut, and more simple terminals to be produced. He envisages that, in connectivity terms, satellite will be joining with a “hybrid network with GSM and WiFi,” building an infrastructure that is more resilient to disaster.

explained how, during the recent hurricane, the south of the country was disconnected for 2 days. A lack of coordination, added to the fact that telecoms infrastructure was destroyed created a hugely challenging set of circumstances. After this experience, Haiti plans to increase collaboration, joining forces with the UN, NGOs, governments and formulating a National Plan, where disaster mitigation activities will be planned in advance to identify all actors and the decisions that need to be taken, and by whom.

Donna Bethea Murphy, Senior VP, Global Regulatory, Inmarsat noted that lessons have been learnt in areas such as the provision of early warning systems for tsunamis, crediting ITU with their work in this area. Satellite equipment will be there “when towers are down.” She pointed out, functioning like a “tower in the sky.” Being able to communicate immediately post disaster is critical, and coordination at national and global level is still needed.

Opening up the discussion, the panel, prompted by a question from the audience, discussed whether governments should look towards prioritizing satellite, despite cost concerns, so that a population can get more familiar with using it and thus use it more naturally in a disaster scenario. Gray noted that barriers to ownership will be lowering, noting also that there will be a “quantum shift” in pricing, with costs expected to decrease. Governments and regulators need to look to this infrastructure now, to incorporate into their ICT strategy. Murphy noted that universal service regulations could be revisited, to include satellite at as they stem from “an age when there were only wireline carriers,” and don’t address satellite. In addition, Altema noted, we need equipment but also good plan, where all stakeholders are on board.

Soberingly, Quimson reminded us that the reality on the ground is very different. Communications are essential not just in terms of vital information but to inform loved ones that you are safe and have survived.

Summing up, Zavazava noted that the cost is crucial, and the best way forward is to use a hybrid, working with what exists on the ground. Noting the new UN Secretary-General’s priority of reducing vulnerabilities, he told panelists and delegates “We will prioritise human life.” We must concentrate on that, mobilise all technologies and harness everything we have.