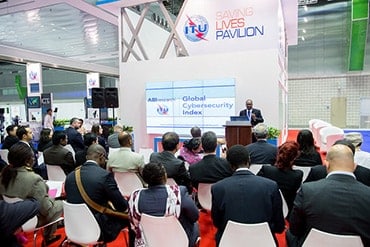 An impressive crowd of delegates and media alike eagerly awaited the results of the Global Cybersecurity Index 2014, which were announced at the Saving Lives Pavillion by ABI Research and the ITU’s Dr. Cosmos Zavazava.

Taking the top position in the Index was the United States, with Canada coming in a close second place. Three countries shared third place – Oman, Australia and Malaysia – while New Zealand and Norway were placed fourth. Brazil, Estonia, Germany, India, Japan, South Korea and the United Kingdom were all joint fifth. During the presentation by ABI’s Michaela Menting and Stuart Carlaw, several countries were highlighted for their exemplary commitment to cybersecurity, including Oman, Turkey, Azerbaijan, Rwanda and South Korea.

There were several questions from the audience, with many delegates taking particular interest in African countries’ faring in the report, as well as the progress that has been made in this region in recent years.

Attendees enjoyed a special appearance from the ITU’s Secretary General, Dr. Hamadoun Toure, who introduced the new Index. He said:

“There are ever increasing and more worrying cyber threats taking place across the world. Cyber security must be integral as we embrace new technologies; some countries are unaware that cybercrime is active in their countries, although as soon as they are aware they take action. We owe it to our children to put in place infrastructure that will ensure a safer online environment.”