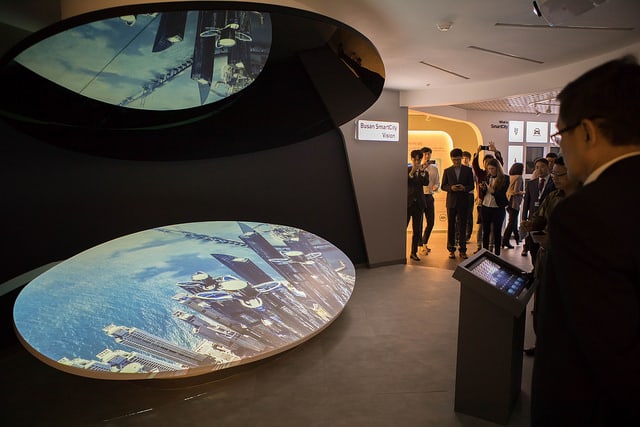 On September 24, the Vice Mayor for Economic Affairs in Busan, Kim Young-whan, welcomed a dozen distinguished Ministers from across Asia, Africa and the Middle East to participate in an interactive Smart City Tour at the Busan IT Industry Promotion Agency (BIPA), to witness first-hand the innovations behind the Smart City infrastructure in Busan and to exchange and share ideas for advancing smart city infrastructure and services.

On display was an array of smart city technologies designed for community safety, traffic improvement, urban living, energy conservation, and more. The Ministers were able to learn about the smart city open data projects that are aiding citizens in their daily lives and also participated in live demonstrations of real-time enabled data monitoring systems already at work in the city of Busan.

As the Vice Mayor noted in his welcome remarks, the city of Busan is a pioneering Smart City with a “first of its kind” policy that was announced at ITU’s Plenipotentiary Conference in Busan in 2014. The attending Ministers were able to learn from the success of the test-bed projects currently deployed and to get inspired for the new IoT-led solutions that aim to improve the lives of citizens everywhere.