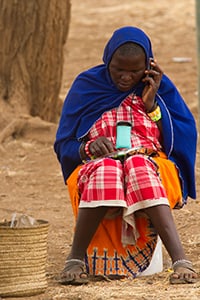 In many parts of the world, mobile telephony coverage is quite simply a blessing. Largely by serendipity rather than planned strategy, its impact in many parts of Africa and Asia has been transformational. Beyond the commercial aims of operators, beyond the initial connectivity of communities previously too rural, too remote or too poor to be viable for fixed line telecommunications, the simple mobile phone has become a vital tool for social and economic development.

In part, this is due to the relentless pace of innovation in the telecommunications sector: in Nepal, a country bigger than all of Scandinavia put together, over 80% of the population have access to a mobile phone, compared to only 60% enjoying basic sanitation in the form of a modern toilet, a product which has evolved remarkably little over the course of the past century.

But much is due to the resourcefulness and inventiveness of local people, driven by necessity to high levels of creativity. All across southern Africa, for example, rural inhabitants use the mobile phone at the nearest kiosk to ring relatives in bigger cities – but without speaking. A complex code of unanswered rings instead conveys the message, whether asking for money or informing of a visit next week. Actually making a voice call is more of a luxury, as it costs more. So a carpenter or other workman fulfilling an order will agree all the details with his customer by SMS, finally speaking once to finalize the deal with a voice call that acts as form of signature on a contract.

These behaviours mean that ingrained poverty can be tracked by following patterns of denser data usage – and that reducing the cost of those text messages, which don’t require any extra resources on the operator side, is a powerful step to fighting that poverty in markets that represent the future.

For we are experiencing major demographic and economic shifts that are moving the balance of income and population southwards, away from North America and Western Europe. By the end of this century, fully 80% of a world population estimated at some 10 or 11 million will live in Africa or Asia, changing the dynamic of global trade and culture beyond imagination. Indeed, the IMF calculates that by 2035 already 75% of the high income population will come from the south.

And the telecoms sector is at the forefront of all of this, of course, driving change through the incredible range, speed and power of technological innovation. Mobile phones are opening up opportunities in those new markets, producing unexpected social and economic development, connecting people to each other, to knowledge and to the knowledge economy.

So this is what I would urge public and private sector leaders at the ITU Telecom World 2014 Leadership Summit on The Future to do: draw on the existing role of mobile telephony as saviour and single most important transformative agent in African and Asian markets. Draw on that to not only position your companies in new markets with quite astounding potential, but to expand the range and impact of the immense socio-economic benefits mobile provides. Reduce the cost of text messaging to allow increased usage. Release anonymized telephone records not for commercial or political aims but to aid projects such as Flowminder, mapping the spread of contagious diseases such as Ebola right now in western Africa, or tracking the mobility of survivors of natural disasters such as the earthquake in Haiti or floods in Bangladesh. The public health benefits are massive; the response to disaster greatly more effective.

Rather than using data from mobile telephone users to locate individuals or keep an eye on a section of the population and its activities, use that data to map the pockets of deep poverty and suffering where social unrest is more likely to arise in the first place. Understand the largely serendipitous power of mobile telephony to change lives, and adapt policies and strategies to enable it to flourish further. In many troubled parts of the world, cell phone masts remain standing and untouched in the midst of mayhem. Such is the importance of communications and connection to the wider world that those masts have more rights than human beings.

It’s a strange and unanticipated state of affairs. But the full power and impact of mobile telephony is overwhelmingly positive for social and economic development throughout the world, and for its poorest citizens in particular.