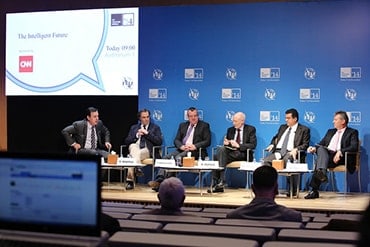 Is the Internet of Things (IoT) set to be the ultimate nirvana of connectivity in the very near future, or will the dream be derailed by issues of privacy, security and spectrum? This was the question posed by moderator John Defterios of CNN to an impressive line-up of industry figures debating the Intelligent Future.

Reminding the audience that the Internet of Things is nothing new, François Rancy, Director of ITU’s BR, emphasized that what has changed is the scale of the connections: “Everything which can be measured will be in digital form, will be transmitted, processed, evaluated and better understood.” Mobile networks are essential, and the fuel for those networks is the spectrum upon which they rely. Having the pervasive network which the IoT calls for, in areas such as the connected car, for example, represents a major challenge for regulators seeking to allocate and manage spectrum without compromising on public safety.

Robert Pepper, Vice President, Global Technology Policy, Cisco Systems, pointed out that the value at stake in IoT in economic terms is estimated at 19 trillion dollars in the ten year period to 2023. Machine to machine devices have overtaken smartphones as the fastest growing category of network with IP addresses, with forecasts of an impressive 221 billion connected devices by 2018, with greater and lower penetration depending on region. Enabling all those devices to talk to each would not course, be possible without IPv6.

The implications of IoT are huge, as Ric Tavares CEO, TechPolis pointed out: chips, sensors, IT connections through the cloud will make way for the much-vaunted explosion in cross-sector applications, services and ecosystems, from health to transport to energy. The complexity of alliances, mutual companies, the integration of commercial, technical and regulatory standards, who provides what to whom in terms of equipment – it’s all up for grabs and with that comes the potential for major regulatory headaches.

“Reality will never meet the pace of change of the expectations, especially when talking about embedded devcies and what they can do, “said Robert Middlehurst, VP for International Public Policy, Etisalat, “There are a myriad of things in the melting pot and we have to work together to work out how to change it, as regulatory bodies, institutions and organizations don’t work at that pace.”

The sense that we have not yet come that far on the road to the IoT was echoed by G Young, CEO, Nawras: fifteen years ago we were wowed by a smart fridge, but we haven’t really progressed that far and have to ask ourselves what would drive the consumer to adopt these things. Delivering value is key, he said: “It’s got to deliver the convenience factor, improve quality of life, add comfort, save energy or money. The wow factor of just being able to do it is not enough.”

Roberto Minerva, Chairman, IEEE IoT Initiative, raised the issue of security, in a world where any physical object can be represented in the cloud. He summarized the challenges to implementing the intelligent future as “getting the business model right for the devices to bring in that money as well as the social implications on privacy and ownership of data.”

“We haven’t stopped to think about data ownership, we are just carrying on,” said Minerva. The issues of who owns the data, who collects it for what purpose, and how to balance protection of individual identity with the benefits data brings remain. For Taveres, the answer may not lie in combining ICT regulators with national and international organizations or bodies overseeing other industries, but with a data regulator specifically selected to govern the use and regulation of data.

Pepper pointed out a broad heterogeneous set of devices need to be connected within different environments, from distances of a millimetre to the other side of the world, and sending continuous messages or occasional chirps. Different types of spectrum will be required as well as a way of making that data actionable to turn it in knowledge and wealth.

Pepper saw growth in the near future in wearable, in particular within the healthcare sector. For Ricardo, Iot applications will power connectivity and enable the full benefits for next generation networks in rural areas, combining rural culture with urban services. But there is little or no danger of companies developing devices within the ecosystem crossing over to become operators – the Telecom industry, the panellists concluded, is the most regulated in the ICT ecosystem, and no one would want to join.