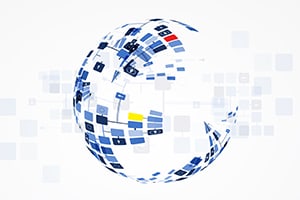 The world has changed, and so should our business theories, strategies and underlying assumptions. Easy to say, perhaps, not so easy to execute. But the basic premise, that stability is the norm and upheaval intense but brief and infrequent, no longer holds true. The periods of stability between punctuations have become dramatically shorter as technology develops, and we’re experiencing a permanent flux of change that calls for adaptability, flexibility, swift and agile responses.

Major geopolitical shifts opening up new markets and breaking North America’s hegemony in many industries, the rise of globalization enabling competition from pretty much anywhere, anytime, the freedom and flexibility of digitization: these are all factors behind the end of sustainable competitive advantage. Meaning it’s not enough anymore to be the best in your field and hold onto your market share. In the ICT sector, in particular, digitization and globalization mean not having to own your capex-heavy assets as a prerequisite to entering the market. Programmers can be based anywhere in the world, web capacity can be bought made-to-measure, servers leased as necessary.

Competition is opened up, no longer delineated by a single industry, but encompassing entire arenas of activity, breaking down traditional boundaries between sectors and blowing up silo walls.

Robert Goizueta of Coca Cola famously exemplified arena thinking with his aim for his particular brand of soft drink to increase its percentage of the average daily human intake of 64 fluid ounces. He was openly pitting his company’s soda against not just other soft drinks, but tea, coffee, juice, even water – the whole beverage arena, much more than one industry.

This blurring of boundaries has always been apparent in the ICT sector – its very name combines both information and communication technologies – but is increasing on a massive scale as technology advances and long-standing business models are threatened. Witness the rise of OTTs as ferocious competitors from the internet world; the convergence of broadcasting and broadband; how cars are becoming mere nodes on an information system; or how big data analytics are growing so effective that human insurance underwriters may soon be out of work in many instances.

And the advent of the Internet of Things is speeding up the process still further. Are washing machines technically-enhanced machines to wash clothes or complex computers with a clothes-washing function? Are smart grids the domain of ICTs, energy companies, consultants or systems integrators? Add in robotics and the merging of the digital and physical worlds, and we are truly in a new competitive era dominated by uncertainty.

Preparing for this uncertain future means moving away from older models, creating resilience to change and openness to new information. Mixing up the structure of a business may mean adopting a portfolio approach based on differing degrees of uncertainty in markets and technologies. Lower risk core business should be supplemented with fairly sure candidates for next generation core products and services. Investing wisely in higher-risk innovation for longer-term growth means getting smart at managing options, being willing to fail where necessary and kill a project, taking it as an experiment from which to learn, not an admission of defeat. Getting in early may mean investing in several competing new technologies before a clear winner is declared, automatically condemning several other options in order to reap the sizeable benefits of not waiting for the proven – therefore expensive – success of one.

This kind of agility and ability to reconfigure quickly is at the heart of the virtualization of network components and software defined networks that are beginning to radically alter the shape of the ICT industry. It calls for maximum flexibility and responsiveness across the whole system, at the expense of optimization of one task or element within that system.

It’s also a business mindset that government and industry leaders alike need to take on board to face the new fluid realities of change as the new norm – and it’s the basis of the new playbook for strategy I’ll be proposing at the Leadership Summit on The Future at ITU Telecom World 2014 in Doha this December.