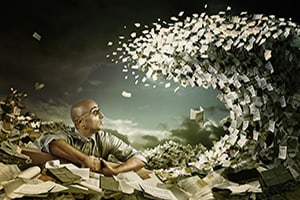 The exponential growth in technology we are currently experiencing heralds a radical restructuring of our societies, businesses and economies. One area where governments and citizens alike can expect technology to make an enormous impact is taxation.

As new technologies emerge and converge, new ways of accessing or applying those technologies are also appearing. From open source technology to the Creative Commons and shared economy apps, the shift is towards making more data more available to more people. It’s a bottom-up, technology-driven empowerment of the people that has already hugely changed creative industries, and is moving to embrace professional services and manufacturing too.

Once writing, sharing and printing your opinion was in the hands of a distant, qualified, expert elite; now everyone can blog, post comments, create webpages or news sites, share pictures, print out documents or leaflets in high quality at home. The advances in technology that made this possible are continuing apace, enabling citizens to do more and more themselves.

A huge range of home-grown services and products will include DIY energy through solar power, DIY healthcare through in-body sensors, DIY education through on-line courses, DIY insurance, even DIY real estate through 3D printing. As technologies ramp up and to scale, prices will fall within reach of more than just new adopters – already, a 2 000m2 3D-printed concrete build costs no more than 50 000 USD.

As individuals increasingly do so much more for and by themselves, roles in society as it stands will come into question as the responsibilities and duties of citizens, governments and businesses towards each other are reshaped. A data-based, more democratized society where more people create and produce rather than merely consume will lead to civic engagement and organization at the local level, empowering local communities. Shared economy apps will enable a similar or greater sense of well-being and purchasing power, but at a reduced cost within the traditional economic framework. This will have a knock-on effect of lowering prices in general, reducing the number of government employees – and resetting expectations in terms of the tax burden.

Any renegotiation of the taxation status quo will shake governments, creating serious debate or even protest, with power is at stake and the whole top-down dynamic under threat. Citizens will demand changes in how much tax is paid and how it should be spent to reflect better the new ordering of responsibilities and roles. The public use of algorithms, big data in the hands of the people, will force governments to be increasingly accountable for optimized spending, for transparency and justifiable levels of taxation.

Open data initiatives, cameras, sensors and drones will enable citizens and consumers to scrutinize the behavior of corporates and governments alike, establishing a fairer balance of power than the current asymmetric set up. So government must prepare for a transition to a smaller, more efficient role with a different scope, facilitating and enabling citizens rather than driving and organizing structures and solutions as at present.

In emerging markets, this can be of enormous benefit to governments able to skip over whole chunks of the evolutionary trajectory of developed markets towards swifter innovation, unencumbered by the deadweight of historic, increasingly redundant legislation, technologies or incumbents.

If governments must change to be more responsive to exponential change, in particular given radical shifts in civic engagement and the taxation base, then so must private sector organizations. New models for the new era involve dramatic decentralization of employees, crowdsourcing, flexibility and scalability of assets, data algorithms and collaborative, bottom-up approaches.

The big challenge lies in making organizations, whether corporate or public sector, exponential. That means responsive, flexible, transparent, decentralized, experimental and collaborative. It calls for engagement and involvement with and by citizens. It calls for a radical repositioning of the main stakeholders in society, government, business and individuals, with major economic implications including an overhaul of tax structures. The importance of going exponential will be my main message at the ITU Telecom World 2014Leadership Summit on the Future this December in Doha.