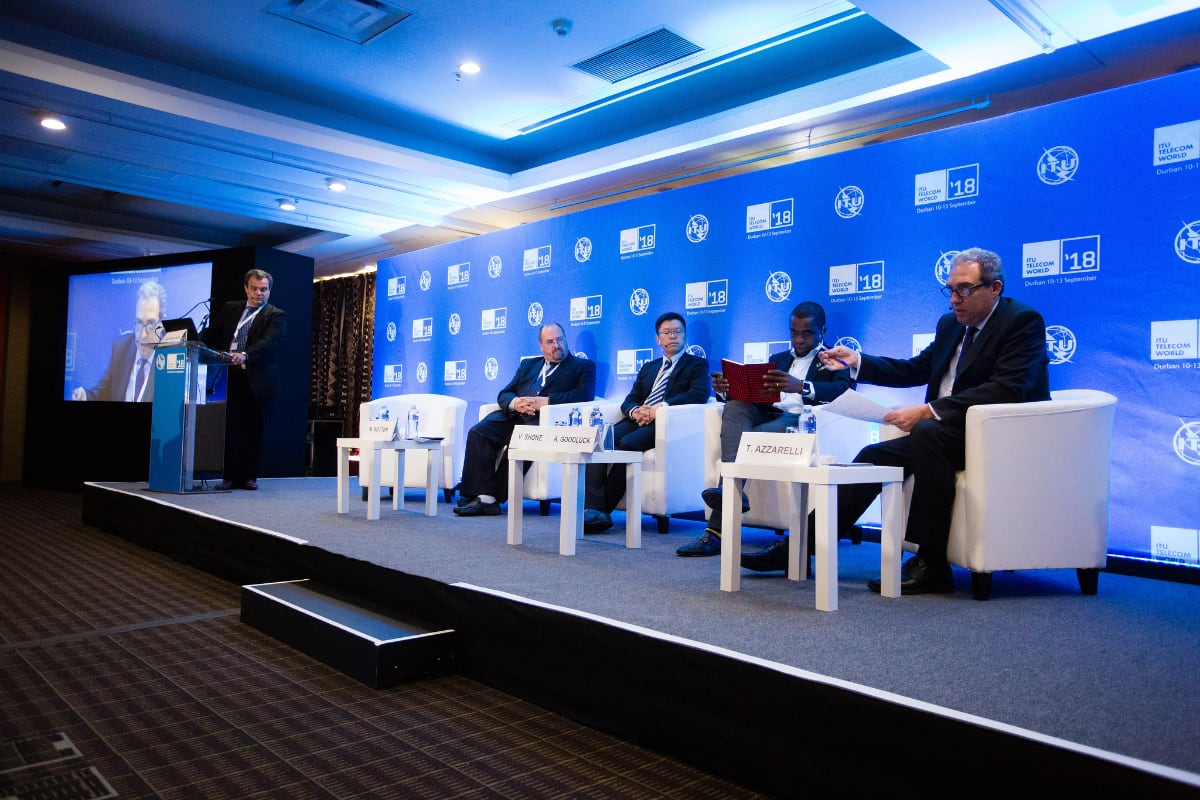 Connecting Africa means connecting locally, and it means connecting in rural and remote regions. But even with an array of technologies new and old – including fixed, wireless, and satellite networks such as high throughput (HTS), non-GSO and High Altitude Platform Satellites (HAPS) –it won’t happen without a new approach to partnerships across sectors, ministries and industries -and political will.

“Technology will not happen in a vacuum. The reality is that we need significant political will to make technology work”, said Akinwale Goodluck, Head of Sub-Saharan Africa, GSMA. “The things that are required for a better future, for connecting everyone, will not happen without the right policies and regulatory mechanisms.”

Existing preconceptions on the challenges of connectivity in Africa need to be re-examined, starting with the fact that in some areas coverage is as high 90%, but adoption only 10%.  “We find ourselves as an industry now building a lot of infrastructure in remote places, but the reality is that we are not seeing concomitant adoption. The coverage is there, but people refuse or are unable to connect due to issues of affordability, content, digital literacy and consumer awareness,” said Goodluck.

To make new technologies work for us we need to rethink efficient deployment of Universal Service Funds, which have until now focused in the Sub-Saharan region on addressing the capex issues. But as Goodluck pointed out, “The reality today dictates that capex is no longer the biggest hindrance to bringing connectivity to remote areas: it is instead opex, providing power and the daily running of the base station.”

Governments, OEMs and operators must work together more effectivity to address this barrier – as well as those of affordability and relevant content. And there’s a pressing need for a change in attitude on spectrum allocation in the Sub-Saharan region, rather than creating an artificial scarcity in order to drive up prices.

There is a further misalignment between population and coverage, where operators are not always deploying to the most populated rural areas due to legacy information and political considerations. Changing attitudes to rural and remote solutions – and using new technologies – can bring real success:  “Let’s change the narrative on rural telephony not being profitable and there being no future in rural access and rural services.”

For Tony Azzarelli, VP Global Licensing and Spectrum Affairs, OneWeb, that starts with understanding exactly where and what services are required, particularly in a continent as geographically diverse as Africa. Different stakeholders have different requirements, from governments looking to communicate with citizens and push out services to rural and remote areas, to businesses need to reach rural areas, to trade and exchange information and citizens wanting access to information, data and communications. “Once you understand the needs, then you realise that one type of tech to bridge the digital divide is not enough – you have to marry different technologies, fibre, wireless, satellites, HAPS, and work together to connect the unconnected.”

Government and industry also need to work together to enable newer technologies to be deployed in rural and remote areas, addressing in particular government investments, subsidies and harmonized regulations. “Satellite suffers a lot from barriers to entry, high cost fees and other legal requirements that often slow down the adoption of these new technologies. Many regulations are obsolete and opaque, irrelevant to new technologies,” said Azzarelli, giving the example of countries such as South Africa or Australia where the thousands and thousands of satellite terminals needed to provide low cost connectivity would require either a blanket licence or even an exemption from licencing altogether.

Satellite solutions can provide low cost connectivity in rural areas, whether high throughput for point to point connectivity, broadcasting and streaming, or the high capacity and low latency required for backhaul LTE and 5G solutions. And as 5G has been designed for cities and urban areas, it won’t be possible to implement rural and remote regions without satellite connectivity.

Mark Rotter, Treasurer, Dynamic Spectrum Alliance (DSA), reminded the panel that there will always be places which are hard to reach and understand, and the reality of connecting on the ground is tough. Sustainable business models ensuring affordable connectivity with low ARPU solutions are critical, as USFs cannot contribute endlessly: “It’s important to work out the maths in terms of capex, opex and overheads.”

Veni Shone, President, LTE Product Line, Huawei, proposed bringing costs down by choosing a major technology, deploying widely and benefiting from economies of scale. As power is such a fundamental issue in Africa, Huawei are using AI to reduce power consumption and maximise the opex structure together with ecosystem partners for each component, targeting a reduction of 20% in power consumption per year. Innovative partnerships should embrace infrastructure sharing, open access, community networks and new verticals such as energy, education or healthcare.

Preventing spectrum shortage is key to enabling new technologies and expanding connectivity. There are, according to Rotter, options in a number of bands and TV white space allowing us to think about spectrum smartly and to share it dynamically. The DSA is working on local community ideas with wireless access providers associations. Goodluck called for policy makers and regulators to facilitate access to spectrum, encouraging people to share and trade spectrum on industry-friendly terms and conditions.

“It’s not just connectivity for infotainment, we need to move also to production,” Huawei’s Shone reminded the panel. More spectrum is essential to devising business models for production tools in Africa. Azzarelli agreed that spectrum sharing should be the main objective of any regulator, reducing the price for poor communities should move away from the spectrum auction model which can inflate prices.

New approaches to spectrum sharing, regulating and auctions are vital, but depend upon on thing: politicians need to understand the relationship been spectrum and connectivity.   And it is not just ICT ministers, but finance ministers who need to be made aware, to avoid inhibitive prices impacting affordability of services in the country.